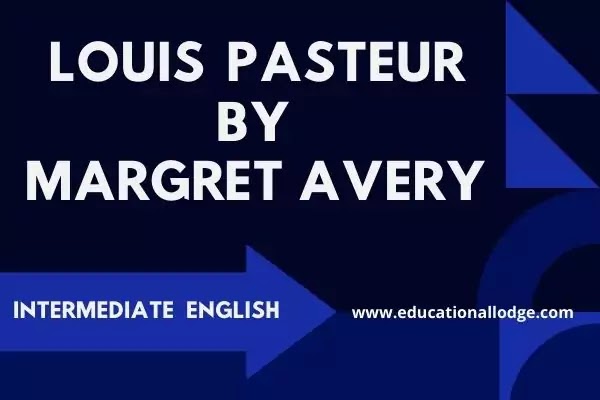 Margaret Avery was born in Oklahoma City Oklahoma and lived in Texas. She served 40 years teaching Sunday School, Wednesday night Bible classes, and private home Bible studies
She was a speaker at Ladies Retreats, Ladies Day Programs, Marriage workshops, and State lectureships. She was given the 2004 image award for leadership at southwestern Christian college.
Margaret Avory wrote a wonderful book Six Great Scientists in 1923 in which she penned down the six great scientists of the 19th century who made their mark in the world with hard work, devotion, and commitment.
These world-famous scientists were Louis Pasteur, Joseph Lister, Charles Darwin, Alfred Russel Wallace, Johann Gregory Mendel, and, Sir Francis Galton. The book explained not only the great work of these scientists but also their lives and the hard time they spent.

Louis Pasture is one of the founders of medicine. He was renowned for his discoveries and his discoveries are marvelous. Human beings are indebted to his services. He revolutionized the theory and practice of medicine and surgery.
Margaret Avery’s essay Louis paster s divided into four parts, Early life, Patriotism, Private life, and Achievements. He was born at Dole in the Jura district of France in 1822 in humble circumstances. When he was a boy, he was not very much interested in studies. Rather he took interest in fishing and drawing sketches of his friends.
Soon he realized to get an education because his family was spending on his education. He obtained degrees in science and arts subjects. Pasture loved chemistry madly. He used to perplex his chemistry teacher by asking complex questions.
His father was a valorous soldier from  Napolean’s army. He got his basic education from communal college and science college. He was elected deputy Professor at the University of Strasbourg. He had great love for his country. He registered himself in France’s army in 1848. He donated all his total savings of 150 francs to the national defense fund.
In 1870 He presented himself as a soldier in the Franco-German war. But he faced rejection from the national guard due to a paralysis attack two years before. He was such a great patriot that he returned his degree of doctor of medicine to Bonn University Germany.
In 1860, Pasteur proved with an experiment that if a substance is sufficiently heated to destroy all life and the air in contact made free of germs, it does not develop any life. He rejected the theory of autogenesis. His scientific investigation urged other scientists for scientific research.
In 1870, Pasteur worked on brewing and got success in producing high-quality brewing. It was a great service for France. He proved that fermentation was due to bacteria. Seeing this, Lister also started thinking about whether inflammation is due to bacteria or not and he was right in that.
He proved that if germs were stopped from the wound, the inflammation was halted. In 1849, The silk-worm industry got a mysterious epidemic in west France, and the whole industry started devastating. In 1865, the government requested Pasture to do research on this epidemic.
Pasture suggested to put the eggs of diseased worms and healthy worms separately. He also suggested utilizing the healthy eggs of silk-worms and maintaining cleanliness. Pasteur started research on animals’ disease anthrax and discovered its treatment.
He even prepared the vaccine to protect from this disease and stopped the death ratio in animals. Pasteur also found the germ of puerperal fever in maternity hospital and told the method to save from it. In 1879, Pasteur invented the method of vaccine and told its importance through his experiments.
The first disease Pasteur injected vaccine was Hydrobobia or Rabies. Pasteur’s research lead the other scientists to research on other human diseases. From 1880 to 1890, the germs of diphtheria, typhoid, lock-jaw, cholera, and Malta fever were discovered. In 1894-1895, the germs of plague and tsetse-fly were discovered.
in 1896-1896, the protective inoculation for typhoid and plague was known. In 1898-1900, it was proved that malaria and yellow fever were spread by mosquitos. It is difficult to catalog all the discoveries of Pasteur. In 1888, Pasteur Institute was built in Paris. It is said that

Pasteur brought the facts of disease and death from the realm of supernatural and miraculous into the realm of nature.

Q 1: Describe the early life of Pasteur
Ans: Louis Pasteur was born at Dole in the Jura district of France in 1822. He was sent to school at the Communal College. Pasteur graduated in Science and Arts from Besancon and was given a post in the college staff. In 1848, at the age of twenty-six, he became Deputy Professor of Chemistry at the University of Strasburg.

Q 2: Give some instances of Pasteur’s Patriotism.

Ans: Pasteur was a true patriot. He enrolled himself in the National Guard in 1848. Once, he donated all his wealth. For the sake of his patriotism, he returned the degree of Doctor of Medicine to the University of Bonn as Germany had plunged into war with his country, France.

Q 3: What do we mean by spontaneous generation?

Ans: It is the theory that says that life can automatically come into being from non-living things. This theory is called autogenesis.  Pasteur proved it wrong.

Q 4: How did Pasteur prove the spontaneous generation was not a fact?

Ans: In 1860, Pasteur proved through experiments if a substance is sufficiently heated to destroy all life and the air in contact made free of germs, it does not produce any life. Thus, he proved confidently that Spontaneous generation was not a fact.

Q 5: Describe the importance and popularity of the silkworm industry in France.

Ans: In France, almost every family from every area had a room for rearing silkworms. This industry was being so important that people instead of asking How do you do asked How are your silkworms doing?

Q 6: How did Pasteur discover the treatment for the cattle disease, Anthrax?

Ans: Pasteur discovered the treatment for the cattle disease Anthrax in a way that he weakened the germs of anthrax and introduced them into the healthy animal. At first, the animal was minutely affected but later it developed resistance against Anthrax.

Q 7: How did Pasteur discover the method of making vaccines?

Ans: In the year 1879, during his working at fowl cholera in his laboratory Pasteur discovered that weakened germs of a disease could protect it against the serious attack of that particular disease. Pasteur named this discovery vaccine.

Q 8: Give an account of Pasteur’s treatment of Hydrophobia and how he cured the first patient suffering from it?

Ans: In 1885, a boy named Joseph Meister had been bitten by a mad dog and had fallen prey to Hydrophobia( Rabies). He was the first patient of Hydrophobia, treated by Pasteur. Pasteur cured him by inoculation of the vaccine for ten days.

Q 9: How did Pasteur show the way to the other scientists?

Ans: Pasteur’s great discoveries like the treatment of Hydrophobia, cattle disease anthrax etc motivated other scientists to try similar methods of cure for other diseases. Getting inspiration from Pasteur, other scientists discovered the germs of tuberculosis, diphtheria, typhoid, lockjaw, cholera, and Malta fever