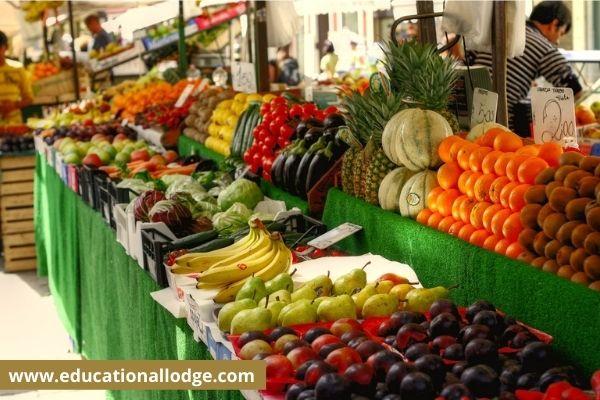 In the Street of the Fruit Stalls

Jon Stallworthy(1935-2014) born in London was a critic, poet, editor, and biographer. He got his education at the Dragon School, Rugby School, and Oxford, where he won the Newdigate Prize. He worked as a professor of English at The University of Oxford.

He wrote seven volumes of poetry and is famous for his war poetry. His collection of poetry comprises The Astronomy of Love, A Familiar Tree, The guest from the Future, and Rounding the Horn. In the course of his literary career, he became a fellow of the Royal Society of Literature and The British Academy.

This is a symbolic poem. The world is facing a crisis of war, misery, and poverty. But all these burning problems have failed to suppress man’s love for happiness. Children love to enjoy the juice unaware of the misery they live in.
They remain absolutely unconscious of the problems being faced by the world around them. Children have lamb-like innocence in them as William Blake(the famous poet) describes beautifully in his poems.
Although the world is threatened with serious and devastating issues of war, misery, and poverty yet these threats have no influence on children’s happiness. The poet is worried about these threats but innocent children still enjoy within their means.

Wicks balance flame, a dark dew falls
In the street of the fruit stalls
Melon, guava, mandarin,
Pyramid-piled like cannonballs,
Glow red-hot, gold-hot, from within

These lines have been taken from the poem In the Street of the Fruit Stalls written by the poet Jon Stallworthy.

The poet describes the dark atmosphere in the street of the fruit stalls. There are many fruits like melon, guava, and mandarin on the stalls. It is evening and candlelight is there to beautify the scene. The fruits of various kinds are piled up like cannonballs.
Poor children purchase fruit and break it open. Their fingers, cheeks, noses, and mouths are wet with juice but they are enjoying it much that they forget the gloomy atmosphere of their surroundings.

In these lines, the poet depicts the grim situation of war and misery. He presents the scene of fruit streets where candles are burning and a dark dew falls. Many kinds of fruits like guava, melon, and mandarin are lying there in a conical form.
They look like cannonballs and reflect hot, golden, and red colors. Dark prevails everywhere. In these lines, a dark dew, cannonballs, and darkness are symbols of war and horror while wicks are symbols of hope.

Dark children with a coin to spend,
Enter the Lantern’s orbit; find
Melon, guava, mandarin,
The sun in a pitted skin

In these lines, the poet says that how poor children the street of fruit stalls and what they feel. Some poor children come into the street to look at the fruit. They have a single coin to spend.
They stand in the street under the dim light of the latter. There are melon, guavas, mandarin and many kinds of fruits. Fruits appear to them as moon or sun, covered in hard skin.
The poet explains to us that the world is full of troubles and hardships. But there are a few joys as well. The children are innocent. They enjoy themselves and forget the pains of the world.

They take it, break it open, let
A gold or silver fountain wet
Mouth, finger, cheek, nose, chin:
Radiant as lanterns, they forget
The dark street I am standing in

In these lines, the poet describes the sensuous pleasure which the children enjoy by eating fruit despite prevailing darkness and horror around them. Their mouths, fingers, cheeks, nose, and chin are wet with the juice of fruit.
They are shining in the light of lanterns and forget their fearful surroundings. The poet highlights the idea that even war, misery, and poverty have failed to crush man’s natural love for pleasure. In short, fruits are a symbol of joy whereas darkness is a symbol of miseries and war.

Q 1: What are the feelings of the poet standing in the darkness?

Ans: The poet feels sorry for the poor black children who can’t buy and enjoy the fruit easily. The poet imagines that the future of children is as dark. He thinks so because of the ever-increasing weapons of mass destruction in the world.

Q 2: Why has the poet used cannonballs to describe the fruit?

Ans: In the modern age, bombs are used in war and the whole world is facing the threat of it. The fruit are in round shape, so they look like gun shells or bombs. The poet has mentioned the threat of war by using the word cannonballs.

Q 3: Make a list of all the fruit mentioned in the poem?

Ans: The poet describes the fruit of different sizes, shapes, and colors. Melon, guava, and mandarin are the fruit mentioned in the poem. The fruits appear to the poet as weapons of destruction. He intends to describe to delineates the horror of war through them.
Q 4: What is the main/ central idea/theme/critical appreciation/symbolic significance of this poem?
Ans: The world is threatened with war, misery, and poverty. But these threats have failed to crush man’s love for pleasure. The poet is worried that the world is threatened with. But innocent children still enjoy within their means.

Q 5: How do children enjoy the fruit?

Ans: The children take the fruit, break them open, and enjoy eating them. When they eat fruit, their mouth, fingers, cheek, nose, and chin is wet with the juice of fruit. They begin to glow like a lantern. In this way, they enjoy eating fruits.
Dec 1, 20202 Comments on Poem In the Street of the Fruit Stalls | Intermediate Poems Book IIIUncategorized