Sir James Jeans’ full name is Sir James Hopwood Jeans (1877-1946). He was the English physicist and mathematician and the one who presented the theory that matter is produced continuously in the universe. He wrote books on astronomy. He taught at The University of Cambridge and Princeton University.

This essay is written about the creation and existence of life. The idea presented in this essay is based on the assumption that it has no solid scientific reality. According to Sir James Jeans, this universe is vast beyond our thinking. It contains innumerable stars moving in their orbits. Some stars so big that can carry our millions of earth in them.

While moving in their particular spheres, they don’t be away from them. If they move away from their paths, a huge devastation may happen in the universe. According to the author, such a huge incident took place millions of years ago as a moving star came near the sun and created tides on the surface of the sun.

The intensity of that tidal pull was so huge that caused large wave on its outer space. After doing this, it started moving away from the sun, and the huge tidal pull burst into countless little pieces. The small pieces spread into space but could not move far away from the sun due to its pull. They started moving around the sun in their own spheres.

Those pieces were then called planets. Our earth is one of those planets. At the start, those planets were very hot but slowly they cooled down due to the intense cold temperature of space. Now they get all their warmth from the sun. But this is an assumption not based on actual reality. There were many questions in the author’s mind but without answers.

For example, (1) if the matter of sun got separated from its pull, why then it spread into space and did not become the part of the sun? (2)Whether the tidal pull of that star was limited to break the matter of sun? It was tough for the star to separate the matter from the sun than to hold the little pieces into its own place.

Moreover, Sir James Jeans has no answer to the question as to how life was started on earth? According to him, life came into being due to a small organism and after that, it changed into the present form of life. He narrates that life can only exist into moderate temperature which is neither cold nor hot and that is present on earth. This temperature is suitable for life on earth.

He compares the universe with the earth in terms of size and says that the universe is frightening and there are long stretches of space and time. We feel ourselves alone due to these stretches and find no life near the earth. There are spaces around the earth. 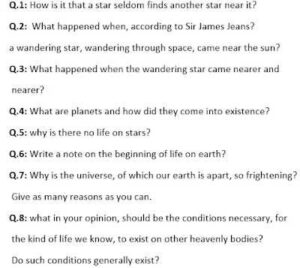 Ans 1: A star seldom finds another star near it because the stars travel through the universe so immense that it is a very rare event for one star to come near to another star. There is an average distance of well over a million miles between one star and its nearest neighbor on a scale model.

Ans 2: According to Sir James Jeans, when a wandering star came near the sun, it raised tides on the surface of the sun that formed a large mountain of tides on its surface. As the tidal pull came back, the wave broke into pieces that we cannot imagine.

Ans 3: An immense tidal wave has raised on the surface of the sun when a wandering star came nearer and nearer. Resultantly huge mountain of tides was made that broke into small pieces.

Ans 4: Planets are the part of the solar system that revolve around the sun. They came into existence as a result of a rare event when a wandering star came close to the sun. The tidal pull of the star formed a mountain of matter. When the star moved away from the sun, the mountain of matter tore into pieces that fell into space. These pieces are called planets.

Ans 5: Life can neither exist in extreme cold nor in extreme hot temperature. Stars are too hot for life to exist. Life needs moderate physical temperature for its existence which is not present on the stars.

Ans 7: The universe is frightening to us because of its wide distances and long stretches of time. We feel alone on our little earth because there are no signs of life elsewhere in the universe.