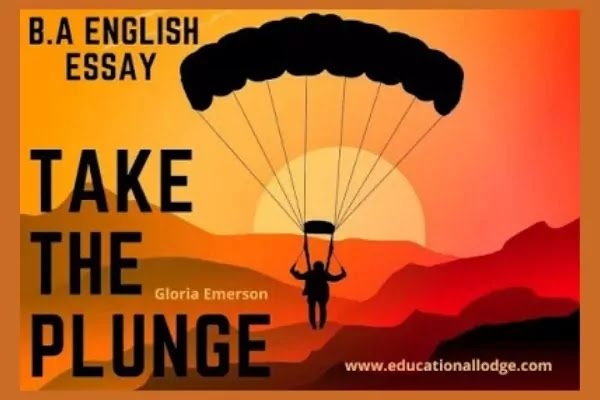 Gloria Emerson ( 1929 – 2004) an author of Take The Plunge is a journalist and American author and New Year Times War correspondent. She got the National Book Award in contemporary thought for her book about the Vietnam war.
He also got a George Polk Award. She wrote four books and many articles. In Saigon, she began to write for newspapers and did freelancing. As a journalist, she worked in many countries in the world.

In this essay Take The Plunge, Gloria Emerson gives details about her parachuting experience in an autobiographical note. She was a slim and physically fragile woman. but wanted to do something extraordinary. Despite her physical disability, she decided to jump through-plane by parachuting.
Unfortunately, she has a bad back and was so weak that no one can imagine that she can perform such great work. She describes her strange experience of jumping from an airplane with graphic details.
The motive behind her jumping was to startle other people about her bravery and extraordinary strength. She has clearly stated her purpose of making a jump from the parachute.

I wanted to be brave about something

She wanted to surprise her colleagues at the newspaper office. Her parachuting experience made everyone amazed. To fulfill her desire, she took admission in a parachute club. The club in charge tried to remove her fear carrying in her heart. She was very frightened but optimist to do that extraordinary task.
She wanted to realize the world that a physically handicapped can also perform different and unique tasks in life. She felt odd in the parachute costume. At first, her colleague jumped down from the airplane. Then she opened her parasol and started to land on other
She landed on the earth very carefully and landed on earth in a secure position. She was very happy with her expedition to jumping. Everyone around her was happy and congratulated her on this struggle. Gloria Emerson’s’ essay delineated her feelings and reaction.

Important Questions Of Take the Plunge

Gloria Emerson worked in a newspaper office. She wanted to do something unusually brave. She could not run fast or give any other energetic physical performance. She decided to have the exciting experience of parachuting. She presents beautifully the stages of jumping, diving, descending, and landing.
Gloria was taken to the first U.S Sports Center at Orange to perform. A naval soldier Istel had established this center. He arranged the first U.S jumping team in 1956. He used to say parachuting was as safe as swimming. He called it the world’s most stimulating and soul-satisfying sport.
Her parachute was very big with thirty-two feet canopy. It had a large cut out to let the air escape. It could be operated with two wooden knobs. The new parachute could be easily controlled. It was designed to increase lateral speed and slow down the rate of descent and reduce swinging movement.
At eight a.m, Gloria, with a companion, boarded Cessna-180. She felt strange in her helmet, the boots, and the jumping suit. It was hard to bend to sit and stand up. Gloria did not like the presence of the drillmaster with her. He was eager and composed.
She wanted to smoke and go to the bathroom, but straps around her did not let her go. When the plane was at the height of 2300 feet., the drillmaster made a thumbs-up sign. It meant that she could jump out. Now her turn came. She suddenly felt a stab of pain. She was tied to an automatic opening instrument that restricted her movements.


When my turn came, I suddenly felt a stab of pain for all the forgotten soldiers who balked and were kicked out.

The drillmaster removed his arms from her neck. He took her to the doorway and cried “Go, Now or out.” The wind struck her to hand. The parachute opened with a plop. Her eyes and nose were running. Spit came out of her mouth. Her chin was wet. She wiped everything with her gloves.
Then came the landing. It was quite enjoyable. There was no noise. The noise of the plane and the wind had gone away. She then saw endless sky and earth in colors and textures no one-hand ever described. The parachute became the most lovable toy for her. She was very happy to see the endless sky and its colors.

Question 2 | How does Gloria Emerson maintain the focus on her feelings throughout the essay?

Gloria Emerson in her essay “Take the Plunge” gives us ample details of her first parachute jumping in a forcefully and convincing manner. She tells us that she was a timid and weak woman. Her eyesight was weak. She was neither graceful nor self-possessed. She was afraid of jumping from the parachute.
She describes in detail the events and the changes in emotions she felt in her experience. At the start, she presented her motive of taking the decision to do it differently. She states her mental condition when she felt reckless and the reaction of her colleagues narrates her emotional state.

It was in May, a bright and dull May, the last May that made me want to feel reckless. But there was nothing to do then at the beginning of a decade that changed almost everything.

This feeling of fear which she shows at the beginning of the essay changes into self-possession and confidence. There runs one feeling in all the stages of her experience of jumping; the conquering of fear by confidence and joy. She feels very awkward. Everybody was sure that she would harm herself.
When she took the decision, she stuck to it and her mind was as clear as clay. She was now confident and no more fearful. She ignored the risks involved in the jumping experience. She was sure to perform this adventure though she felt strange in jumping costume and other accessories. Although she was enjoying jumping when the actual time came she tried to avoid it.
When she took the plunge and reaches in the open sky, her feelings were changed. Fear and anxiety were converted into balmy, calm, and pleasure. She felt sky charming and beautiful. Sky and earth liked different but enchanting. Wind and trees seemed kind and soft. Her feelings were changed now and she did not want to land on earth. She completed her jumping and received appreciation.

Question 3 | What are the motives of Gloria Emerson in making the jump?

This essay of Gloria Emerson is narrative and self expository. It is based on her experience of parachute jumping. She was reluctant and indecisive before doing the adventure. She wrote many stories but her stories did not capture readers’ attention. Then she wrote on her own parachute experience.


The truth is that I was an unlikely person to jump out of an airplane, being neither graceful, daring nor self-possessed

The objective to perform this task is to surprise and startle her colleagues and to impress them by her expedition. Her confidence led her to achieve her goal. Once we make a decision and determined to it, we can do marvelous things in life. Gloria Emerson was a woman of outstandingly exceptional qualities who dared to jump into space from an airplane.

In her autobiographical essay, she showed her courage, confidence, will power and the ability to take the plunge that made her distinct among her colleagues. Her companions used to taunt her and made fun of her physical disability. She had bad back, uncertain ankles and could drive with competence because of her deficient depth perception.

In spite of all the criticism, she decided to join a training institute of parachute jumping. She was much excited and wanted to feel her exalted in jumping as jumping needed no talent or endurance. It seemed perfect for her. She could not run due to her disability but this plunge suits her.

I wanted all of it: the rising of a tiny plane with the door off, the earth rushing away, the plunge, the slap of the wind

After attaining training, the day came when she performed the activity. At first, she was scared and felt a stab of pain and uncomfortable in her costume and other accessories.she drenched into perspiration and wiped her eyes and her nose running with the gloves.on reaching the hight of the sky, everything seemed to her calm and serene. She then landed safely on the ground.

Then I saw what I had never seen before, will never see again; the endless sky and earth in colors and textures no one had ever described.

Other Modern Essays For B.A