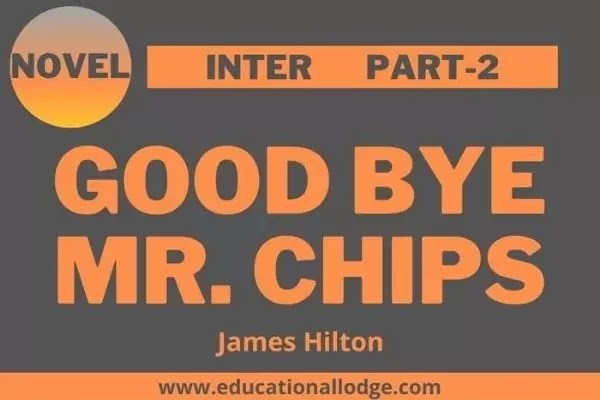 James Hilton writer of Good-Bye Mr. Chips was born in Leigh, Lancashire, England, in a schoolmaster’s house in 1900. In 1921, he graduated from Cambridge University. Being a university student, he wrote his first novel, “Catherine Herself.” After graduation, he wrote a column twice in a week for “The Dublin Irish Independent” for several years.
His novel “And Now Good-Bye” was a success and good return for James. The editor of The British Weekly magazine, came to James to write a short story within two weeks but he was worried to write it because he had two weeks deadline. As the date of the deadline is coming closer, he had no idea how to write a story.
One night he took his bicycle and went riding. On coming back his mind got clear and he decided to write the world-famous novel “Good-Bye Mr. Chips” ( a story that is an inspiration and based on his father who was a school teacher). He wrote this story in four days.
The editor of the magazine was much impressed to read the story and he wrote to the parent company to publish the story in the American market. It got much popularity and monetarily more profitable there instead of the British market. On the recommendation of the editor, the company published the story in the American magazine The Atlantic Monthly.
The story got the attention of both the readers and the viewers and was also admired by the New Yorker column. After that, it was appreciated on the radio show and two months later it was published in book form and got international popularity.
Later a movie on Goodbye Mr. Chips was made and it was one of the classics of the world. He wrote more novels like Knight without Armour, Lost Horizon, and Random Harvest. He then moved to the U.S.A and died there with cancer

Goodbye Mr. Chips is an emotional and sentimental novel that was published in 1934. It reflects the life of a retired school teacher who spent many years in an English boys school, Brookfield. It is a novella and a flashback of a school teacher’s memories for his colleagues, students, and his marriage with Katherine.
Mr. Chips’s full name was Mr.Charles Adward Chipping. In 1870, an unsophisticated and shy but competent Mr. Chiping joined a traditional  Brookfield school as a school teaching career. Brookfield was an English boys school that was constructed in 1492, one of the oldest and revered boys school in England.

Mr. Chips was eighty-five years old when he started residing at Mrs. Wicket’s house. He was sitting in his armchair in front of the fireplace and thinking his first day Brookfield school when Mr. Wehtherby the acting headmaster him to watch the disciplinary steps.
It was a boarding school and Mr. Chips served there many years. Before joining Brookfield, he also served a year at Melbury school but he was not comfortable there. He did not get appreciation from the headmaster. His first experience was not good but he was determined to be turned out a good schoolmaster.
After retirement, Mr. Chips started residing at Mrs. Wicket’s house who was once the in-charge of linen room at Brookfield. He spent his time in inviting students to tea, reading books and magazines, and watching cricket matches which were played in the school playground.
Anyhow he brought discipline in the school that was the requirement. Something really good that he never gained at Melbury school. He was a bachelor although he taught 25 years at school and everyone thought about him that he might never get married in life.
Mr. Chips lived at school and had no pleasure and entertainment in life. He was not comfortable around women and only liked delicate and weak women. At the age of 48, during summer vacation, he went on a trip to the Lake District with his colleague.
During that trip, he was climbing at the hill, when he saw a woman standing on a dangerous cliff. She was waving her hand. She seemed in a difficult situation who was asking for help. Seeing that, Mr. Chips proceeded to her to help her out from this situation.
In spite of helping her, he injured his ankle and Katherine had to bring him back. Mr. Chips’s encounter with Katherine brought the most beautiful incident of the novel. Both fell into love. Katherine was a twenty-five-year-old modern young English woman who was inspired by his kindness and old fashioned manners.
There was a big age difference between Chips and Katherine. Both have different personalities that made Chips afraid of their relationship. He was a shy person but in the second meeting, he gained the courage to ask her to dance the waltz before during the last night.
When Katherine was going to England with her friend, she said Goodbye to Mr. Chips. Before the end of the summer, they got married. Within a short time, Katherine changed the dry Chips into a good-natured person who was now loved by the students. He was now a different person because the power of love changed him completely.
Chips became kind, soft, and friendly to everyone. He gained respect and affection of students and faculty. He was full of enthusiasm and vigor and became the most beloved teacher of the school. Katherine died during childbirth and made Chips sad and serious person but his enduring love for Kathy made him balanced his personality and pursue his career.
Years later, when an elderly Chips was given notice of termination by a young school headmaster whose desire was to modernize the school, the students, their parents, and the faculty supported chips and demanded headmaster to ask Chips stay on. Many years later when Chips was retired he spent his time entertaining the young schoolboys.
He developed a closeness with students while listening to their problems. During the first world war when many were enlisted in the army, Chips was asked to join the school and serve it as a headmaster, years before he and Katherine had desired.
He joined school but after retirement, he again started living at Mrs. Wicket’s house and brought close connection with boys. he died while remembering his past time and last time a young student Peter Colley III waved chips while saying him Goodbye Mr. Chips.
In the novel Goodbye Mr. Chips, He became a legend at the school. He is called a living personification of the school. The boys, teachers came and had gone but Chips remained there for years. He was an integral part of Brookfield. He also represented the pre-war world and its values.