Hitch Hiking Across The Sahara by G.F. Lamb | Author’s Intro, Summary, Q and A

> Uncategorized > Hitch Hiking Across The Sahara by G.F. Lamb | Author’s Intro, Summary, Q and A 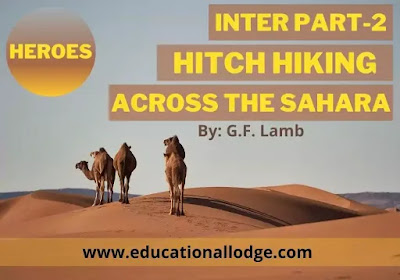 Hitch Hiking Across The Sahara by G.F. Lamb Lesson 12, Hero-2

G.F. Lamb was an English author. Being a British writer, He wrote books on Shakespeare Quotations, more good stories, six good samaritans, animal quotations. He was appointed as commander of the order of the British Empire by Queen Elizabeth.

Summary of Hitch Hiking Across The Sahara

In this essay, G.F.Lamb explains in detail the journey of the Sahara Desert and the hardship Robert Christopher faced during his travel. This essay presents his determination and consistency in continuing a very tough journey.
Robert Cristopher was a young boy and his foster mother used to threaten to send him to Timbuktu whenever he did any mischief. This journey of Cristopher was to the Sahara Desert that is located in North Africa. The Sahara Desert is almost hundreds of times much large than the Great Britan.
During day time, the sand becomes very hot. It has few water wells and the vegetation is little. It is a place where no one even thinks to reach or of hitchhiking but the young Cristopher wanted to cross the Sahara Desert. He belonged to America and decided to cross it in 1956.
His journey was started from a little town Boussaada in Algiers. He took a lift in a truck with only two persons, the driver, and the greaser. There was a very hot temperature that a flask of cold water became so hot to make tea even.
By then a military carriage overtook them and by showing a permit from the War Ministry, Cristopher was allowed to take a lift in it. The military carriage dropped Cristiopher at Ghardaia(a city of flies). From there, he took a lift in a truck going to El Golia.
The driver of the truck informed Cristopher about three Englishmen who tried to cross the Sahara but died. On the next morning, they came to know that due to the hot temperature, the water bags had burst during the night. Being miserable due to thirst, they went in search of water.
Luckily they found a well of water and quenched their thirst. The heat was incredible and the outside temperature was 165F. Finally, they reached a small fascinating town of El Golia that is a true oasis with excess availability of water. Cristopher enjoyed there a lot.
The journey from El Golia to In Salah was not without new excitement. Due to the extremely hot temperature, Cristopher felt weakness and fainted. His companion gave him much water to drink and he came into senses. In Salah was completely opposite to the El Golia.
In Salah, he took a lift in another truck leaving for shortly and reached Tamanrasset. There, Cristopher made contact with Professor Claude Balanguernon a Frenchman who succeeded in educating the people there. He had also adopted their habits and customs.
Balanguernon proved to be a Cristopher guide, host, and friend. With his help, he got a chance to meet the Tuareg king and it was fascinating for Cristopher. There he learnt camel riding because there were no more trucks and he had to continue his journey on a camel.
Cristopher started his journey with his companion Boubaker each on the camel. On the way, they found no water to drink. Then they slaughtered the camel and quenched their thirst with the greenish fluid from the camel’s stomach. Now the most dangerous stage of the journey was to bear.
The sand dunes were burning with heat. The area through which they were passing is known as the Land of Thirst and Death. there were sandstorms a well as for dried waterholes. Due to fierce sandstorms, the hid behind camels but the sand felt like little needles pinching their bodies.
A day later, he caught sight of the first glimpse of Timbuktu that was his goal the last of his journey. In Timbuktu, he gained the weight that he lost in the desert. He felt himself fit and well. He had a curious longing to see some more deserts before leaving.
He sent a telegram to Professor Balanguernon in Tamanrasset. Cristopher flew to the eastward to Agades then traveled north to meet Balanguernon by partly hired jeep with the french lieutenant and partly by camel.
Unluckily, the caravan with which Cristopher was traveling, changed its route but a boy lead Cristopher to the well at In Abbangarit and left him there. There was no building only bordj, a simple mud structure building and he waited for the Professor there.
he was shocked to see that there was water in the well but it was 46metres below. He had no rope or bucket to take water out. He had a metal teapot and fastened it with line and then another line, with the available bits of clothes, and then his turban but could not find water.
At night in his sleeping bag perceiving himself dying with thirst and huger if Professor did not come the next day. He had a small recording machine with him and wanted to record his last thoughts for those who found his body. Then suddenly he felt that the wire of recorder is 305 meters long.
He cut the wire into pieces, twisting them together he made a rope to tie with the teapot and finally succeeded bringing some water at last. It was not sufficient but it could save him from thirst and death. The next day Professor arrived there with a friend and Cristopher was saved from dying.

Hitch Hiking Across the Sahara, Answers of the Questions

Q 1: Give an idea of the size of the Sahara. how is it in comparison with England?

Ans: The full Sahara desert, stretching almost the complete width of North Africa, is many times the size of Great Britan. For example, if England is placed somewhere in the desert, it will be an uphill task to find it.

Q 2: What had Cristopher’s foster mother to do with his desire to see distant places? how did Cristopher develop an interest in crossing the Sahara?
Ans: Cristopher;s foster mother often threatened him to send to Timbuktu if he did any mischief. Instead of alarming him, his threat created in him a keen desire to see this distant place. He determined to cross the Sahara desert when he became a young man and was firmly gripped by the wanderlust.
Q 3: How did he manage to get a seat in the weapon’s carrier?
Ans: Cristopher showed a permit from the war ministry to join the French Foreign Legion. That permit was canceled later on but the lieutenant did not notice it and allowed him to travel in the army vehicle.
Q 4: What was the most noticeable feature of the desert city, named Ghardaia? How did children look like in Ghardaia?
Ans: Ghardaia was a desert city with numerous and stickier flies. They followed the food to the mouth and remained stuck on the faces of children constantly. The children looked as if wearing a mask of flies.

Q 5: How did they manage to drive the heavy truck in the trackless desert with its soft sand?

Ans: The truck could not move on the soft sand. They spread iron strips to make a runway for the wheels to move on. When the truck reached the harder surface, they collected the strips and put them back in the truck.

Q 6: What did the driver of the truck tell Cristopher about three English men who had attempted to cross the desert?

Ans: Hantout told the story of three English men whose car got stuck into a dune. They have no availability of water. They tried to drink water from the radiator and even the oil from the crankcase. Three days later, they were found dried like dry leaves.
Q 7: Give an account of the little town, named El Golia, and compare it with In Salah, bringing out the difference between the two.
Ans: El Golia was a beautiful little town with a pond of cool water and many palm trees. On the other hand, In Salah was barren with few bushes. It was fighting a battle for its survival because of sand encroachment. It did not have plenty of water either.
Q 8: How did the professor save the hero’ s life towards the end of hitch-hiking?
Ans: When the Professor could not find Cristopher at the appointed place, he very sensibly realized the true situation and got in touch with the Desert Patrol. So the rescue party reached just in time to save Cristopher’s life towards the end of the hitchhiking.
Q 9: Describe the events leading to the killing of a camel. What sort of water did they get from its stomach? Why did Cristopher and his companions kill a camel?
Ans: While going to Kidal, the travelers had to face the greatest challenge when their water supply was gone down to zero. So, they had to slaughter a camel. The liquid from the camel stomach was a distasteful greenish fluid. Even it was difficult for the native people as they drank it. Cristopher boiled it and held his nose while he drank.
Q 10: Describe the journey through the land of Thirst and Death./ What was the most difficult and dangerous stage of the journey face by Cristopher?
Ans: The toughest and horrible stage of the journey was “The land of Thirst and Death”. That area was known for sandstorms and dried up wells.
Cristopher and his companions had to face storm. The sand dune seemed as if they were standing on fire. They could have been buried by the sand but unfortunately, the storm ceased shortly.
Q 11: Describe the stay in Abbangarit. How did Cristopher manage to get water there?
Ans: At In Abbangarit, a borj was the only building consisting of a roof and four walls. The well was about 275 meters away but water 46 meters below. He took a tape recorder’s wire and tied it with a cup and lowered it in the well. This method worked and he succeeded in collecting a lot of water.

18 thoughts on “Hitch Hiking Across The Sahara by G.F. Lamb | Author’s Intro, Summary, Q and A”