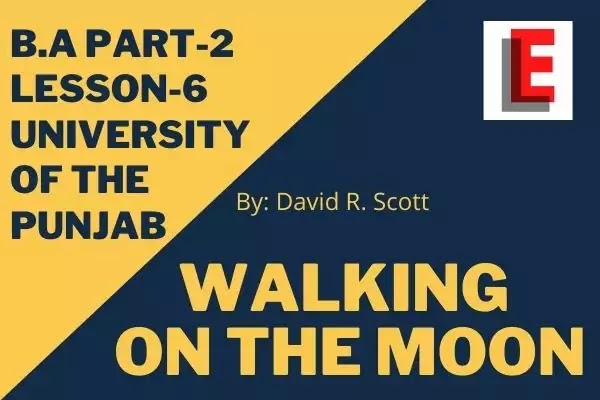 Walking On The Moon by David R. Scott Lesson#6

David Randolph Scott (June 6, 1932- present) is an American engineer, retired Air Force Officer, former test pilot, and former NASA astronaut. He graduated from United States Military Academy and became an astronaut. He retired as a colonel.
David R. Scott served as a command module pilot of the Apollo 9 flight with commander James McDivitt and lunar Module pilot Russel Schweickart ie had n 1969. Two years later, he went on the extraterrestrial voyage as the commander of the Apollo mission to the Moon in 1971.
He made this historic moment with his fellow, James Irwin, and Alfred Worden. From 1972 to 1975, Scott was selected as a member of the administrative staff of the Apollo- Soyuz Test Project. He then became director of the Dryden Flight Research Center at Edwards Air Force Base.
After leaving the space program in 1977, he entered into a private business in Los Angeles. He was the author of books, ‘Two Sides of the Moon,” Our story of the Cold War Space Race, with Soviet cosmonaut, Aleksey Leonov.

Summary “Walking on the Moon”

Question 1  Discuss Scott’s visit and experience on the Moon

To fall on the moon and I did several times is to rediscover childhood. You go down in slow motion, the impact is slight, the risk of injury being nil.

The writer fell on the surface of the moon several times but he received no injury because of the lunar dust the surface was very soft. Actually, it was only 1/6 of the normal weight due to the gravity of the earth. The writer and his friends enjoyed it a lot.
When they returned, they left on the surface of the moon, a falcon feather, a clover flower, the Bible, the image of a man spacesuit, and a Rover jeep. Their journey towards the moon was the first step to conquer the depth of space.

Question 2   What are Scott’s feelings on the surface of the moon?

That’s one small step of a man,One giant leap for mankind

(Neil Armstrong)
David R. Scott and his two companions landed on the moon. He felt alien and everything seemed strange and unknown. Life was impossible on it. They were afraid of any malfunction in their spacesuit or lunar module.
It meant sure death. But they believed in the engineers who had made their spacesuits and the lunar module. The walking on the moon realized them the importance and dignity of man and his reach to the highest knowledge of the cosmos.
It was the life about which no one can imagine. They proved to be the living marks of history. The experience they got there was unique and exceptional in human history. They observed many incidents there.
The climatic atmosphere and environment of the moon were different from the earth. Everywhere there was dust. There was no wind, no rain, and as a result, there was no tree on the moon. Everything seemed grey. Everywhere rocks were scattered.
Initially, they felt uneasiness but at last, attached deeply with the atmosphere. The writer has given many contrasts and comparisons by providing details of his experience. The most important thing which they observed. was weightlessness.
On the moon, the weight of the writer became 1/6 of that was on the earth. He felt very light and free. They fell several times on the surface of the moon but did not receive any injury. They saw that the sky looked totally dark with stars.
They found that the earth shone on the moon as the moon shone on the earth. The writer used imaginative language to present his point of view. He thought that their prints on the surface of the moon will be forever and no rain would wipe them out.
Although they faced many problems there yet they experienced a sense of loss while leaving the place. When they came back they brought very rare information for future astronauts. He recalled his short stay there which looks like a dream.
Aug 10, 202041 Comments on Walking On The Moon by David R. Scott Lesson-6 | B.A Part-2Uncategorized