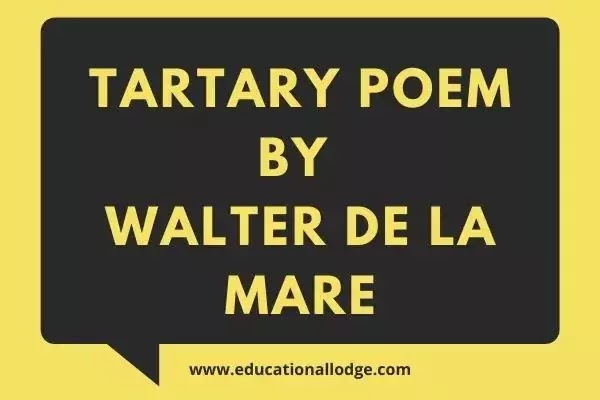 Sir Walter de la Mare( 1873- 1956) was an English poet, short story writer, and novelist. He is best remembered for his works for children and for his poem The  Listeners. He wrote several short stories of traditional genres, many are tales of supernatural.
He also wrote some subtle psychological horror stories, amongst them Seaton’s Aunt and Out of the Deep. His 1921 novel Memoirs of a Midget won the James Tait Black Memorial Prize for fiction and his post-war Collected Stories for children won the 1947 Carnegie Medal for British children’s books.

The poem Tartary is based on the imaginary world. In this poem, the poet wishes to be the lord of Tartary, where he can enjoy all the pleasures according to his own will. There is a rich variety of exotic colors.
The ivory bed, the peacocks, lulling music carry the reader to this land of charmful delights. We know that such a place does not exist but we allow ourselves to be allured. The basic theme of the poem is wrapped in the wishes of the poet.
Walter De La Mare demands monarch like treatment. He wishes to be the lord of Tartary all alone. He does not like any shareholder. He wants to rule all over the natural as well as artificial objects of Tartary.
The poet demands the company of all those natural objects which are impossible to see for a busy person in this modern era. Though the man of today has destroyed his aesthetic sense yet still his spirit needs to enjoy the natural beauties.
The poem Tartary has all the qualities of a romantic poem. The language of the poem is very simple. The poem deals with the wishes and demands of the poet. The poet wishes to be the lord of the unseen world, which is not present in this world.
He longs to enjoy all these natural beauties and scenes with the help of his imagination. He believes that natural objects are a constant source of pleasure for man. The land of Tartary is full of greenery. The poem is a criticism of the behavior of modern man.

Explanation of the poem

Lines 1-8
If I were Lord of Tartary.
Myself and me alone,
My bed should be of ivory
Of beaten gold my throne;
And in my court should peacocks flaunt
And in my pools great fishes slant
Their fins athwart the sun.

The lines have been extracted from the poem Tartary written by Walter De Mare.

In these lines, the poet tells us about his desires if he becomes the king of Tartary, an imaginary land. Being a king of Tartary, he would enjoy a lot by sleeping on a bed made of ivory. He would also feel proud of sitting on his throne that would be made of pure gold.
He would also build a beautiful palace having a splendid courtyard. The peacocks of different colors would increase its decoration. They would move freely in the courtyard from one place to another very calmly and peacefully.
The forest of this imaginary state would be unique because of numberless tigers that would move freely to add to the beauty of the forest. The pools of his palace would teem with beautiful and rare fishes that would swim in the clear water and create different colors in the sunlight.

Reference: same as for lines 1-8

Lines 9-16
If I were Lord of Tartary
Trumpeters everyday
To every meal would summon me,
And in my courtyard bray,
And in the evening lamps would shine,
Yellow as honey, red as wine,
While harp, and flute, and mandolin,
Made music sweet and gay.

Reference: same as for lines 1-8

In these lines, the poet tells us that if he were the lord of Tartary, he would be called for every meal by his servants who would blow different types of buggles. In the evening, his palace would be enlightened with different colored lights.
These lights would increase the beauty of his palace especially the light of yellow and red color would be a source of decoration. The colors of these lights would be as yellow as the color of honey and red as the color of wine.
Many types of musical instruments would also be played in his palace. The music of these instruments would create a romantic environment in the palace and the poet would feel relief by listening to this alluring music.
Lines 17- 22
If I were lord of Tartary.
I’d wear a robe of beads,
White and gold, and green they’d be
And clustered  thick as seeds;
And ere should wane the morning-star,
I’d don my robe and scimitar,
And zebras seven should draw my car
Through Tartary’s dark glades

In these lines, the poet tells us about a dress that he would wear a gown being a king of Tartary. His royal dress would be studded with various colors of diamonds. It would be a very costly dress because of pearls which would be in a large number as there are seeds in a feild.
He would wear this dress before the rising of the sun and especially a small scimitar that would add the beauty and richness of his dress. After wearing the royal dress, he would visit the green fields of Tartary. He says that as a king he would sit in a carriage that would be pulled by zebras, not by horses
Lines 23-30
Lord of the fruits of Tartary
Her rivers silver-pale!
Lord of the hills of Tartary
Glen, thicket, wood, and dale!
Her flashing stars, her scented breeze,
Her trembling lakes, like foamless seas,
Her bird-delighting citron trees
In every purple vale!

Question 1:
Discuss the Poem Tartary by Walter De La Mare as a Romantic poem
Answer:
Tartary has all the features of a romantic poem. It is about an imaginary land somewhere in the East. The imagined land is replete with romance, adventure, natural beauty, thrill, and mystery. The land is beautiful, rich, fertile, and full of unheard and unseen delights.
This makes the whole atmosphere romantic. The rich variety of exotic colors is pleasant. The use of imagery is effective and colorful. The poet believes that the scenic beauty of nature and enchanting sounds are a precious treasure of delight and wonder of man.
The use of imagery is effective and colorful. The poet has given good proof of his fondness for nature like Wordsworth. This poem is similar to Coleridge’s poem Kubla Khan. Colors and sounds evoke everyone.
Unlike monarchs of the modern world, he hates luxuries and valuable vehicles run through mechanical devices and shows his preference for carriage drawn by seven Zebras.
In this fertile land, there will be every blessing of God. This land of Tartary would be a heavenly place on earth, with its beautiful hills and valleys, its trembling lakes with cool, crystal, and clear water, and even flowering rivers.
Its trembling stars, fragrant breeze of the early morning, a cluster of trees, and beautiful birds sing sweet songs making it a land of charming delights. The poet has beautifully created a romantic atmosphere with the help of effective use of imagery.
Like a true romantic,  Walter De La Mare escapes into an ideal world, where every thing is waiting for his order. He imagines himself to be the master of that glorious land called Tartary. In this way, he tries to satisfy his unfulfilled desires of real life.
Question 2:
How does the poet takes us in the realm of imagination in the poem Tartary?
Answer:
Walter  De La Mare takes the reader into the realm of imagination through colorful images and diction. He has used romantic kind of imagery in this poem to create a soothing impact on the minds of the readers.
Almost all the images like ivory bed , beaten gold throne, flaunting peacocks, slanting fishes, sweet music, zebra-driven carriage, etc, are very fanciful images. But the most fanciful image is the magical evening in his palace.
The sound of the trumpets, the yellow and red lights of the lamp, the melodious music harp, flute and mandolin, etc, create a romantic atmosphere. The yellow lights like yellow honey give sweetness to the surroundings while red lights like red wine that intoxicated us.
The picture of a gorgeously dressed up king moving about in pleasing yellow and red lights, with music filling the atmosphere is most romantic and fanciful. There are many other fanciful words in the poem. The first image is sitting on a throne of pure gold.
The second image is when the poet wishes to sleep on a bed made of ivory. The third image is related to the eating meal in the light of lamps and the fourth fanciful image is the wearing of a dress made of costly beads. We can say that the poem is replete with fanciful images.
Nov 21, 202016 Comments on Tartary Poem By Walter De La Mare | Critical Appreciation, Stanza Questions AnswersUncategorized