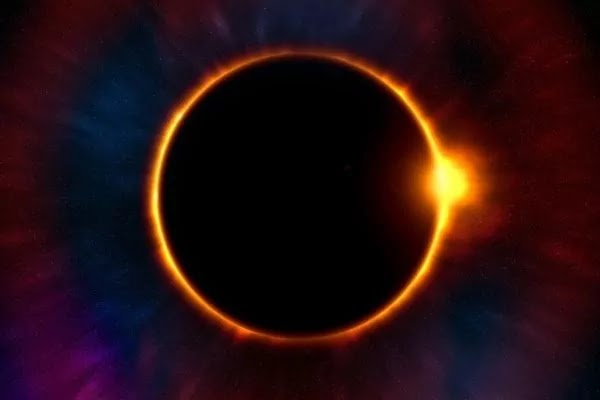 The Eclipse By Virginia Woolf

Virginia Woolf’s actual name was Adeline Virginia Stephen (1882-1941). She is a famous English writer and novelist. Her notable novels are Mrs. Dalloway and To the Lighthouse. She also wrote essays on literary history, politics of power, women’s writing, and artistic theory. She got mastery in biographical writing, short fiction, and wonderful letters to friends and family.
She was one of the modernists and was the first in using the literary devices of Stream of consciousness (A literary device in which a person’s thoughts, feelings and reaction to an event is expressed in continuous flow). She also wrote more than five hundred essays and reviews.

This is a narrative and expository essay of Virginia Woolf that presents her brilliant observation and creative delineation of solar eclipse. The scene of the solar eclipse is beautiful and fascinating. This is one of descriptive essays that express her artistic and aesthetic approach and her qualities as a creative artist.
Virginia Woolf’s this essay was about the solar eclipse. She describes that the sun is the center of the solar eclipse and all the planets revolve around the sun. Our earth is one of the planets that takes light from the sun. During eclipses, when the sun loses its light, it changes it’s color and darkness spreads everywhere.
The motive behind writing this essay is that if there is no sun, no life could be happened on earth because on earth everything needs light. The sun plays a significant role in the solar system and provides light to everything on earth. The earth gets light from the sun and if there is no light it will face the darkness. After the eclipse, the light and vitality on earth returns.
In her descriptive essay, she shares her and many other feelings for the solar eclipse. She narrates that when a solar eclipse was seen in Yorkshire England, it was only for twenty-four seconds but it changed and molded the fabric of civilization. It also shows the eagerness and passion of the inhabitants of England.
Their excitement was worth seeing. People from all the over England started gathering there to take the glimpse of the solar eclipse and to capture the spectacle into their eyes. Their enthusiasm was started a night before and many of them woke the whole night to see its beautiful scenery in the morning.
From the various parts, people reached the Euston Railway Station. There was no sleep at night and no fixity in England. They felt connected with the whole world. People on the way joined the gathering and had enhanced its strength. At last, they reached their destination on the high moorland and settled on the ground.
Some started eating and others moved here and there. They were waiting impatiently and no one was ready to move away from that place. Finally, the sun rose from the east and started sprinkling its rays on the ground. There were some clouds over the sky and soon the sun shone bright.  The snow started melting and clouds captured the sun.
A paly of hide and seek was started between clouds and the sun that aroused suspense among the people. The appearance of the cloud created obstacles but the sun pushed the clouds backward to reach its destination. The sacred period of twenty-four seconds eclipse of the sun started then. The moon covered the sun and the sun vanished behind the moon.
Now the hollow and blotted sun can be seen. Intense cold and darkness was everywhere then. This created a sense of horror that made people scared. It sounded the end of the world. Finally, the sun appeared again and started filling the whole world with life and vitality. People felt that without the sun, there is no life, no activity, and life.

Questions of the Essay “The Eclipse”

Q.1  Reaction of the people at the sighting of solar eclipse

Early in the morning, men, women, and children were seen going to earth. The world became more and more solid, it became a place where an infinite number of farmhouses, of villages, of railway lines have lodgment unit the whole fabric of civilization was modeled and molded.

It was a cold morning. The sky gained great importance. Everybody was on the road. Some were taking the trains, while others were traveling by cars. The stations were full of people. There was no sleep and no fixity in England. There was great activity on that morning. The people were running towards a rocky place to witness the great event.
They were running in the form of a procession. The farmers and their families also joined the gathering. They were dressed in neat and clean clothes.it seemed as if they were going to the church for worship. They had an odd sense of keeping an appointment with the great actor in the world called the sun.
The sky became very important for everyone. Everybody suffered a change in his mental vision. They did not belong to their native homes, dwelling places, and streets. They were related to the world. They were knit into one unity. They shed off their individuality and became one with the whole of humanity.
They were fully excited to see the scenic beauty of the sun. When the sun rose above the sky, the clouds came from suddenly and tried to capture the sun. However, shaking all the obstacles, it was in a hurry to reach its destination. Then the moon covered the sun and it became blotted and hid behind the moon. A darkness spread everywhere that made people a bit scared.
The eclipse was only for twenty-four seconds but it changed the whole fabric of civilization.it sounded that the whole world had gathered at one place and all had a similar objective to take its a glimpse. After the eclipse, the sun regained its light and vitality again. There was life everywhere on the earth.

Q .2 Write the importance of reference to Stonehenge.

Ans. Importance of the reference to Stonehenge
Virginia Woolf gave the reference of Stonehenge in her essay “The Eclipse. “Stonehenge is a monument founded in England. Henge means the “hill”, so it is called a ring of stones put in the barren land of England.it is a prehistoric place and people used to go there for worship. It was considered sacred for the people they performed their worship.
The writer of the essay used the word Stonehenge to describe the religious touch. She says that people from all over England gathered at the hill in Yorkshire to see the solar eclipse. They stood in a circle position to visualize the spectacle of the sun. They stood the same as the Stonehenge stands.
They sounded the people of ancient times who stood there in the same position to worship the sun at the time of the solar eclipse. But people gathering here just to observe the solar eclipse not to worship the sun.
The eclipse is a different and unique essay in which the writer presents the details of the solar eclipse. People were coming from various places and their gathering was increasing by the joining of the people on the way. They had no other activity. All the activities were stopped only the see the solar eclipse that was going to happen then. The sun seemed like an actor of nature with such a great vastness.

We had an odd sense of keeping an appointment with an actor of such vast proportions that he would come silently and be everywhere.

It was a morning of June when at Euston railway station in Yorkshire England, the solar eclipse was going to happen. A huge number of people were moving to Euston. Virginia Woolf was also one of them. People were in great procession going to the place to observe the solar eclipse. It was a wonderful scene.
A change was going to occur in people’s lives but a change was only for twenty-four seconds. The writer presents the significance of the sun because it is going to lose its light, its identity, and its vitality. But it regains its light as the eclipse ended.

Ans. The theme of the Essay
Virginia Woolf is an acclaimed English novelist, critic, and essayist. She portrayed a beautiful phenomenon of the solar eclipse in her essay “The Eclipse.” She has also illuminated the significance of the sun because it is a powerful source of light for the whole cosmos. Her essay was written like a drama where the sun appears to be the main important character to perform on the stage before the world.
The stage of the drama that was set for the sun to perform was the sky. She decorated the stage with the figurative language of colors, similes, and images. The drama of eclipse that she presented seemed so real and captivating and readers feel to happen before eyes.
People were eagerly moving to the cliff to view that splendid scene with the sacred feelings for the sun as the ancient people did while worshiping Stonehenge. On the hilltop, people were standing like statues in a circular position with their faces upward to the sky.
As the sun appeared, clouds came to capture it. Light shone peeped through the clouds but the sun was in haste to reach its goal where the eclipse was to happen. The sun played hide and seek behind the fleecy clouds and at last, made its path straight, the moon then covered the sun. The daylight vanished for twenty-four seconds.
The writer has beautifully described the sun’s struggle to escape from the clouds. She has personified the sun as it puts efforts to make itself appear before the world. The clouds were stopping the sun to move forward and the sun, again and again, make it clear from the clouds.

Of the twenty-four seconds only five remained, and still, he was obscured.

The flesh and blood of the world was dead.

So if there is no sun, there is no life on the earth. Earth with all its discoveries and inventions is primitive without the sun. Colors can only be enjoyed with the sunlight otherwise, life is dark and insignificant on earth. So the sun is a source of energy for life on earth.
Jun 26, 202030 Comments on The Eclipse By Virginia Woolf, Author’s Intro, Summary and Question AnswersUncategorized

30 thoughts on “The Eclipse By Virginia Woolf, Author’s Intro, Summary and Question Answers”