Using the Scientific Method, About Author, Summary, Q & A | for 2nd Year Students

Both supervised the teachers of science College High School, Colorado State College of Education. They are co-authors of the famous book “The new basic science “that was published in 1956. Using the Scientific Method is taken from this book.

At the start, first, we see what the scientific method is? We can divide it into six points

This is an explanatory and factual essay by Darrel Barnard & and Lon Edwards. The authors have delineated in detail how our lives have been modified by using the scientific method. Science has provided the solution to the many problems that we faced before the invention of scientific procedures. Science has revolutionized our lives and we are being benefitted by scientific use.

Human beings had to face epidemics and no vaccine was there to save their lives and they died due to the diseases. Life was uncertain and unsure.  The new scientific method has helped us in controlling diseases and human beings are vaccinated now. They are now safe and the life expectancy of people is enhanced. The average age of human beings is now extended to 70 years.

Our sanitary conditions were not good in the past. The houses were narrow and dark. The roads were unpaved, uneven, and rough. There was no system for the drainage of dirty water and people threw garbage on the streets. Now science has addressed the issues relating to hygienic and sanitary conditions. Roads are paved and the water supply is good.

Now here is a proper system of water drainage and people are aware that dirty water becomes the cause of spreading diseases. Now clean water is everywhere and people use it for their households. The water supply is enough for domestic purposes. Science did wonderful in providing good sanitary conditions.

We can obtain fresh food throughout the year. Now, man is fully aware of the preservation method to get fresh fruits, vegetables, seafood, and meat. He is acquainted with the drying method and can use canned food. Their nutritional value is also maintained.

Science has enlightened human minds. Modern people have overcome prejudiced and superstitious thoughts. Now they judge the circumstances logically. Those who think the diseases are caused by evil spirits are fewer in number. Although fortune-tellers are performing their practices yet they affect less the lives of few people.

Now science has changed their way of thinking and attitudes to develop open-mindedness in human beings. Today’s men don’t believe in superstitions. He knows that every incident has cause for its happening. They are no more scared of the black cat, mirror breaking, and with number 13.

They have changed their stale old concepts and are open-hearted and open-minded. They look forward to new things rather to get afraid. Many of their problems are resolved now due to the scientific method.

Answers to the Questions 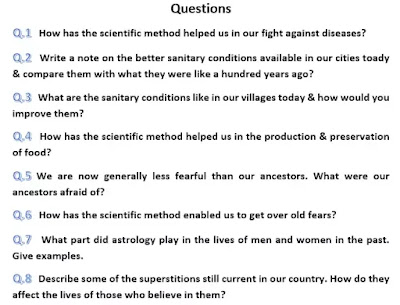 Ans 1: In the past, people died of fatal diseases like yellow fever, typhus, cholera, typhoid fever, measles, and whooping cough. With the use of the scientific method, we can fight against the disease. This all occurred with the invention of modern medicine and epidemic control.

Ans 2: Sanitary conditions in our larger cities, one hundred years ago, were very poor and unhygienic, but today our city streets are paved, well-drained, and well cleaned. Sewage from all the parts of the city is carried through sealed pipes. Clean water is supplied to the people now.

Ans 3: In our villages, sanitary conditions are not good. Streets are not paved and well-drained. The system of sewerage is not proper. We can bring improvement in managed planning and by making people conscious about their health. Streets must be paved. Garbage must be removed.

Ans 5: We are now generally less fearful than our ancestors because they believed in the signs of good or bad luck. They were afraid of black cats, broken mirrors and the number 13. They wore different kinds of charms to avoid bad luck.

Ans 6: superstitious beliefs are got over by the use of the scientific method which has shown that there is no sound basis for them. It has taught us that there is always a good natural reasons for everything that happens.

Ans 7: Astrology and fortune-telling affected the lives of people greatly in the past. People attributed both good and bad to stars. They consulted astrologers before doing anything.

Ans 8: There are a lot of superstitions in our country. People have a strong belief in evil and wrong things. Business of fortune-telling is in all areas of Pakistan. Some people plan their activities in the light of the signs of good and bad luck even.

5 thoughts on “Using the Scientific Method, About Author, Summary, Q & A | for 2nd Year Students”

7 Tips to Turn Your Hobby into a Career | Educational Lodge