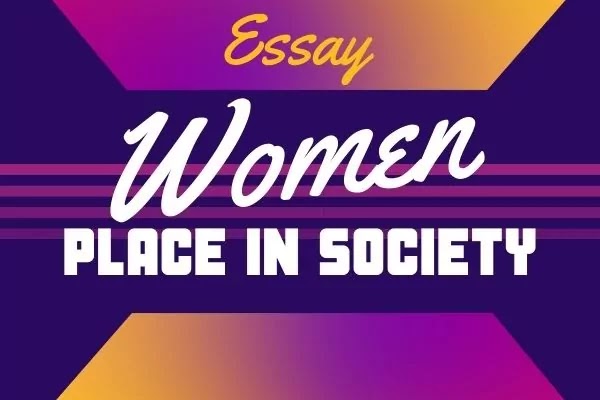 Women in society are as important as men. Women hold an equal position in society as men.
We should give the rightful place to our women. Women in society are as significant as men. They are the counterpart of men. In the past, they were considered inferior to men. They were debarred from taking part in social life.
They were limited to domestic and work. Both men and women make it possible for society to exist and progress. They cannot be ignored due to weak creatures. They are a beautiful creation of Allah.

O, fairest of creation! Last and best of all God’s works.

The position of women in our society is, on the whole, not very satisfactory. Most of our women living in the villages are uneducated and uncultured like the village men. They do not have many of the rights, which men enjoy in rural areas. Very few enjoy independent positions as owners of land or property. They depend on their husbands or other men looking after their families. Village women cannot often marry according to their choice.

Women have the same rights in relation to their husbands.

The women in cities are somewhat in a better position. Some of them can, of course, get educated and can marry according to their choice. However, women in poor families like those of laborers or wage earners live like village women. Most of them work hard in their small, dirty houses, serve their husbands and take care of their children. They live in a quite a helpless condition.

Married women do not do the work freely. They mostly depend on their husbands in all important affairs of life. If they use their own will, their husbands may be opposite to them, and quarrels and disputes may happen. These disputes sometimes end in divorce.
It was a common thinking of the people that women are not independent and no separate identity. But now hard work made women strong and they not only manage house but also lead the nation in difficult time.
In advanced countries like Japan, France, Britain, Germany, and America, women are considered respectable. They are treated equally with men in almost every field of life. The education they receive is like men.
In the villages there, women own and control their properties and lands even independently of their husbands or the male members of their families. In the cities, in most professions, women can work side by side with men. They can have their will in some important matters of life like buying or selling houses, deciding about the careers of their children.

Women’s place in society marks the level of civilization.

We should give enough chances for our women to work in different fields of life. Women living in the villages should find it easy to work on village farms with men. Chances should be provided to village women to come to the cities to study or to learn the practical skills of doing agricultural or industrial work.

The education of a man is only of man but of a women is of the whole family.

Women should be free to marry as they like. There should be more scope for our women to work in some profession like teaching, social welfare and medicine. Women do work as well as men. Some special professions need to be improved and reformed a great deal.
Women always took part in the prosperity and development of the nation. Women worked along with the men in the early days of Islam. The history of Islam is replete with the great women who were remarkable Islamic scholars, poets, and even warriors and nursed the injured on the battlefield.
Being a Muslim, a woman plays pivotal roles like a good wife, cooperative sister, obedient daughter, and dutiful mother. She performs her duties diligently and wholeheartedly. Islam and the constitution of Pakistan has given equal rights and a respectable place in society.
Yet, it is necessary for our women to take special care of their homes, husbands, and children. This is the first duty of every woman to give importance to her family and to work for them. Family should be the first priority for a woman. We should give the right place to our women in society. Only then can we make true progress as a nation.

Nobody can make you feel inferior without your permission.