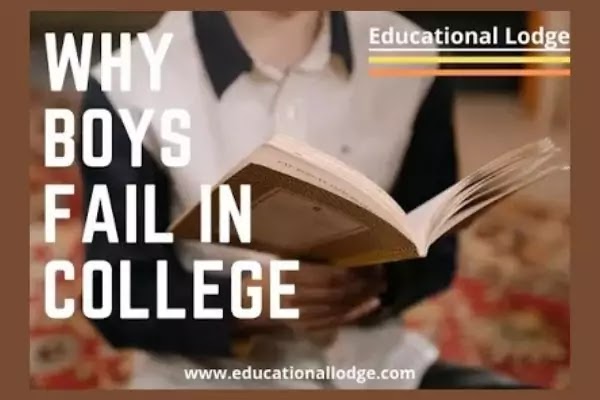 Why Boys Fail In College

Herbert Edward Hawkes (1872-1943) was a mathematician and an expert educator. He had first-hand knowledge of many problems that boys faced during their college period. He remained Dean of Columbia College for twenty-five years, the longest tenure for which he secured the title the “Dean of American College Deans.
He studied mathematics and wrote texts on algebra. Understanding the problems of the students, he wrote this essay to describe the causes of failure. He also provides the solution to their problems. He wrote many articles and these articles were published. He compiled the articles in the book “College, what’s the use”.

Summary | Why Boys Fail in College

Why boys fail in college in one of the articles that the author published his book College, “what’s the use.” The author of this essay elaborated on the reasons for the failure of college students. He divided the reasons into seven categories. But before describing the reasons, he classified the students into two groups (1) those who try, (2) those who do not try.

Reasons of failure into seven sub-divisions

1. The first category of students is they do not concentrate on the studies. They have a lack of concentration. They do fidget activities and do work nervously.
2. Those students who are forced to study the subjects where they show less interest. This is called the mistaken ambition of the students. Their parents exert pressure on them to choose the subjects which are not of their interest. So the writer says to the college administration to provide counseling to students in selecting the subjects of their interest.
3. Some students are over-confident and ignore doing work, fail due to this attitude. They are bright students but put little effort and had not understood the impotence application.
4. Some face the problems of health (physical, mental).they are so weak to study. Health is another obstacle in students’learning. They face various health issues. Their parents even don’t give any attention to them. The writer focuses that their health issues should be addressed at college and awareness should be provided to them.
5. The deserving students who have a lack of money to continue their studies. These students face financial pressure. They afford their studies on their own expenses. They do some odd jobs to continue their studies. This results in poor health and less value education.
6. Those who take an interest in games and literary activities. They join athletic and sports activities and give them full time instead of concentrating on their studies. They have less time to prepare for exams. So they fail due to such reasons.
7. Those who do not pay heed to their studies. Resultantly they fail. They join college to enjoy and to make fun. The lazy bluffers whose objective of life is to make merry. They fail and drift out the college.

How these students can be helped out

In the last author gives the solution for them. He says that students can be helped out in the selection of the right subjects and proper career. Financial aid should be provided to them if needed. Ill students should be provided with proper medical aid. The writer says there should be a medical expert in college to help them out. If we provide such arrangements for the students, the number of failures can be controlled.
Sports are a vital part of college and most of the students who are national level players are picked from the college. But those who spend their whole time in games should be struck off from the college. Let the lazy bluffers on their own so that they can learn by the experience. 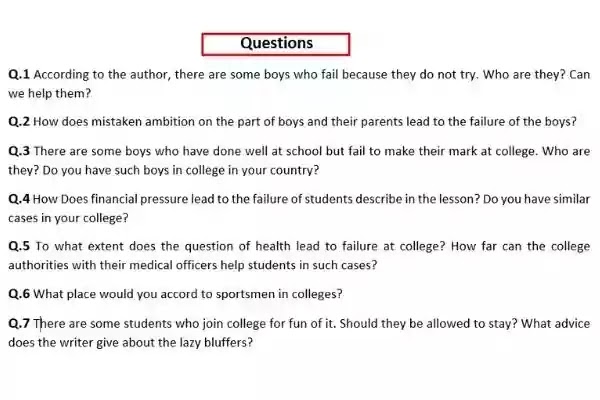 Questions And Answers | Why boys fail in college

Ans 1
The author says that some boys fail because they do not try. They are the students who suffer from nervous habits, mistaken ambition, poor physical health, financial problems, over-confidence, no-seriousness etc. We can help them by just pointing out the problem.
Ans 2
Mistaken ambition of the parents takes to the failure of the boys because they follow a direction that their parents mapped out that is totally opposite to all of the students’ interests. They are forced to study subjects which they do not like and as a result, they fail.
Ans 3
They are the bright boys who consider college-level an easy step. They become overconfident and do not work hard. They suppose that they can float through college with a little effort as they did in the schools, so, they fail to make their mark at college. We have many boys in the colleges of our country.
Ans 4
Financial pressure leads to the failure of students because they have to earn for their college expenses. They have to do part-time jobs to make both ends meet because their parents do not support them. It always has another adverse effect on their health and education. We have many similar cases in our country.
Ans 5
An immense number of boys fail due to poor physical and mental health. They cannot concentrate on the assigned tasks properly due to different diseases. The college authorities can prevent their failure if they have adequate health services and proper cooperation between the teaching staff and the college doctor.
Ans 6
Sportsmen are the celebrities of any college. The co-curricular activities and sports have their own place in college, and only those students should participate in them who are interested in them and want to become professional.
Ans 7
Few lazy bluffers do not find any serious interest in life and join college just for fun. Sometimes they learn a lesson and return to do first-rate work. The writer advises that they should not be allowed to say if they do not change their behavior because one black sheep can contaminate others.