A Road Accident, An Essay For Intermediate Students

> Uncategorized > A Road Accident, An Essay For Intermediate Students 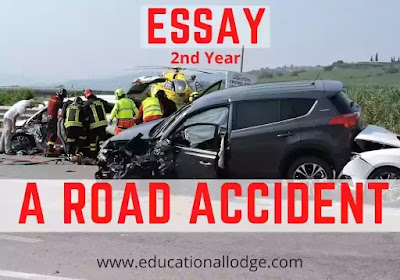 A Road Accident, An Essay for 2nd Year Students

In the midst of life, we are in death

With the rapid growth in population, road accidents have become a common feature of our daily life. Accidents also occur with an increase in the number of vehicles and modes of transport. Accidents can be avoided if people would follow traffic rules. We daily read much news about accidents in the newspapers. These accidents become a cause of loss to life. Every day, people see accidents but show negligence on the roads.
Once we were going to Lahore. We boarded on the bus. The bus was on its way. Suddenly, we heard the sound of a horn from a car from behind. It overtook us very rashly. The driver was driving the car at full speed and was very reckless and we thought that something bad might not occur. As the car overtook, it clashed the next car and hit it with full power. The driver of our bus was very sharp-minded and he narrowly escaped from colliding with the car.
He held brakes at once and we came out the bus so that we can rescue the persons in the car. There was a great clamor of people everywhere.  Some presented themselves for help while many did not do so. There were just two persons in the car, a man and his driver. We should be thankful to science for hi-tech mobiles that we can call any person anytime and anywhere.
I dialed the number of Police Rescue Service from my cell phone. The operator on the other end jotted down the message and relayed on the wireless system. Meanwhile, some people had managed to get the injured ones out of the car. Their heads were bleeding and they were crying in pain. The driver had fainted but the man was in his senses though injured.
“Will you please dial my home number”? The man said and began to tell me the number. I dialed the number and told details about the accident to the person on the other end. After some time, the police, as well as the ambulance, approached very fast. The police officials made way for the ambulance. Two constables started restoring the jammed traffic.
The inspector took a preliminary report from the eyewitnesses. A car lifter machine was called which lifted the damaged car and cleared the way. The ambulance had rushed back and the traffic became normal as if nothing had happened. We also boarded the bus and resumed our journey to the Lahore. My head was heavy, as I had seen a bloody scene.

The web of life is a mingled yarn, good and ill together, (Shakespeare)

This can be observed in our life. Human life is very precious. There is no second chance for it. If one loses one’s life once, one cannot be’ animated again. Likewise, body parts like legs or arms cannot be replaced with genuine spare parts. Therefore, one must follow the road safety measures. We should protect not only ourselves but also the other people so that a sense of security must prevail all over.

There is no armor against –Death lays its icy hands on kings.

Jul 11, 202012 Comments on A Road Accident, An Essay For Intermediate StudentsUncategorized

12 thoughts on “A Road Accident, An Essay For Intermediate Students”