End of Term by David Daiches

David Daiches a Scottish historian, literary critic, writer, and scholar(1912-2005) wrote on English literature, Scottish literature, and Scottish culture. He got his education from George Watson College and won a scholarship to the University of Edinburgh where he got Elliot prize. He wrote a book A Critical History of English Literature. He also wrote literary essays that include this essay “End of Term.”

In this autobiographical essay, David Daiches remembers his school days and expresses his feelings and memories relating to school holidays. He criticizes the boring and rigorous school system. He talks openly about his poverty and his unfulfilled desires. The writer has a sharp memory and described minute details of by-gone days even.

David Daiches refers to a book that was written by a school teacher “Friday, Thank God.”He expressed the same feelings that were written in the book. The author says that he never found spare time to enjoy fully because he has to face daily hectic routine and ever-present competition. For the writer, Monday morning was an unpleasant one because he had to go to school and there was an escape from school.

He said that he and his brother Lionel used to sleep in the same bedroom but his sister was in the other room.there was a maid in his house who used to come in their bedroom and announced in a loud voice to wake up without thing the author’s desire for more sleep.

He felt that maid ‘s steps were a call for damnation. At last, he was able to get rid of such a routine as he said goodbye to school and entered the University. The author felt much happiness on Friday as it brought a couple of holidays. In the afternoon when walked home, he felt himself an escaped prisoner from school.

Friday night was the best night for him but Sunday night was very unpleasant and an end of his happiness as it was followed by a packed routine of the week. Some unscheduled breaks were a great blessing for him to bring the message of pleasure. For example, some unexpected half-day holidays due to crises, celebrations or to watch a football match.

In the days of frost in winter, a full day was allowed for skating holiday. He had annual mid-term holiday once in a term, a Monday off which made the weekend-long and luxurious. He remembered that there were three terms in an academic year of school. First-term ended in the Christmas holiday, the second term in the Easter holiday, and the third term in the summer holidays.

The real holidays for the writer were the summer vacation spread over a couple of months. The school closed and he made his way home with a sense of pleasure. Three long tiresome weekend had ended. The wishes of the writer were always unfulfilled. For example, he wished for a tricycle that his parents could never afford for him.

When he grew up, he wished to have a bicycle but again he could not have it. He got a bicycle at the age of twenty when he won the prize money from the University of Edinburgh. He used to stand many hours at the sweetshops and ice cream wheelbarrows with blank pockets.

He used to stay long watching people with eatables and expecting the ice cream man to offer him ice cream but it never occurred. He had to save money but could not be left to spend. At last, the summer vacation came. the school year ended and the day came when he got free from school. He made a journey by train to his village with his family. 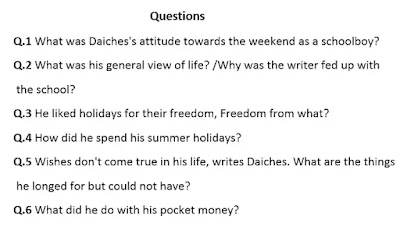 Ans: Daiches’s attitude towards the weekend was that of happiness and gratitude. He longed for the weekend because it relieved him from the grind of school, its abundant homework, and a sense of never being able to relax.

Ans: Daiches’s general view of school was not very pleasant. He always thought that school was a place of acute hard work and tough competition. The school homework seemed to him an oppressive burden, though he was not a dull student and actually enjoyed the classroom work.

Ans: The writer liked holidays because they freed him from the daily grind of school, its much homework and fierce competition. The holidays provided him happiness and peace of mind.

Ans: For Daiches, only summer holidays were the Holidays. It seemed to him a period of great joy and permanent felicity because he was free from the daily hard work of the school and could not enjoy his holidays freely at the places of his own choice.

Ans: He remarked so because he wished to have a bicycle and then tricycle in his childhood but could not get either. He also wished to get ice cream and seats free of cost from the ice cream barrow or sweet shop. But he had been disappointed every time.

Ans: David Daiches spent his childhood in poverty. He got a little sum as a  pocket money which had to be saved in a money-box. Therefore, he rarely got a chance to spend it on himself.

7 Tips to Turn Your Hobby into a Career | Educational Lodge