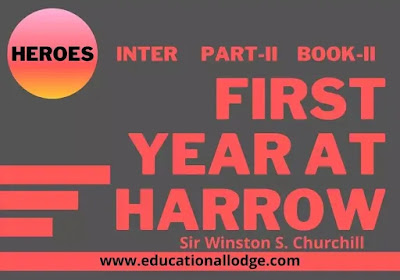 Sir Winston S. Churchill in full Sir Winston Leonard Spencer Churchill (1874-1965) was a renowned politician and former Prime Minister of England from 1940 to 1945 and again 1951 to 1955. He was an army officer and writer.
He was a great prose writer and wrote many books. He won a bel prize for literature in 1953. His famous book was A History of English Speaking People. He was known for inspiring speeches.
In his essay, First-year At Harrow, He describes his own experiences at the popular school Harrow. He never liked exams because always considered exam a trial for him. He deals with the essay in a humorous way by telling the time of his entrance exams

Churchill’s essay First Year At Harrow is his second essay in which he explains in detail his experiences at the public school Harrow. He tells about the admission, exam, learning Latin, Greek, and English.

Resultantly, the writer did not perform well. This happened with him at the entrance exam at Harrow. He could not even attempt a single question. He wrote his name at the top of the page, then he wrote question no 1 at the corner of the page.

After that, he put a bracket around the question like this”(1)”. He put smudges on the paper, made it dirty, and left the paper blank. But the Head Master Mr. Welldone was broad-minded and the writer got admission to the school.

He was put in the lowest degree due to his poor performance in the exam. He remained for the one year in the same category but he gained the advantage over the clever boys.

When all went with Latin and Greek, he was taught English. A very delightful man Mr. Somervell was his teacher who taught English in the best way. He broke English sentences into its components such as a verb, subject, adjective, noun, and adverb, etc. And the writer learned English thoroughly.

English proved to be best for him in his later years. The boys who were taught Latin and Greek also came down for English as a medium of earning. They were compelled to learn English for their living.

In the end, the writer says that would like the students who like to learn English. He wanted that the clever boys would learn Latin for honor and Greek for pleasure. but e would be hard with those who do not learn English

“First-Year At Harrow” Answers of the Questions

Q 1: The writer says that the examiners ask questions which students can not answer and not those which they can answer. Is the complaint just?

Ans: Sir Winston Churchill’s complaint is not just because the examiners have a prescribed syllabus. This complaint is the dilemma of the dull and idle students.

Q 2: What sorts of questions are asked by your examiners?

Ans: Most of our examiners ask questions that are just from the syllabus. They are set according to a formula. Such questions only promote rote learning and the capacity of their memory. They do not promote creativity.

Q 3:Why did not Churchill do well in examinations?

Ans: Churchill was not good at Latin and mathematics, while the examiners asked questions mostly from these subjects. Moreover, The questions asked were unanswerable. There, he did not do well and felt that the examiners wanted to expose his ignorance.

Q 4:How did he do his Latin paper?

Ans: Churchill wrote his name at the top of the page and then the question number 1. After some thinking, he put a bracket around the question number. Incidentally, the paper became untidy with smudges. He spent the remaining time looking at him.

Q 5: Churchill was taught English at Harrow and not Latin and Greek. Was it a gain or a loss?

Ans: Churchill mastered the English language. He could use it accurately. He found it useful in practical life where the medium of communication was English. So he did not feel himself at a loss.

Q 6: What good did his three years stay at Harrow do him?

Ans: By remaining in the same class for three years, Churchill learned English thoroughly. It proved a great blessing for him because English was made the most important medium of communication later.

Q 7: In after years how did the Knowledge of English stand him in good stead?

Ans: The knowledge of English stood him in good stead because English was beginning to be used extensively. People had to learn it to earn their living. Even the intelligent boys had to come down to English, but Churchill remained successful then.

Q 8: Write an appreciation or criticism of Churchill’s views in regards to the study of Latin, Greek, and English and their value in earning a living?

Ans: Churchill thought that English must be learned prior to Latin and Greek. He thought that the intelligent boys were very much after Greek and Latin because they thought their knowledge would give them an edge over others. But for Churchill, the knowledge of English proved a blessing in disguise