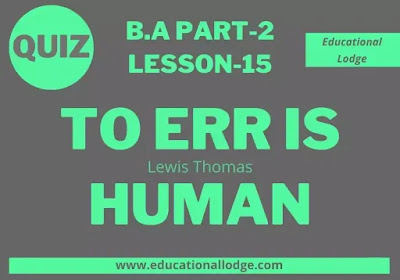 TO ERR IS HUMAN Lesson#15(Lewis Thomas)

MCQs: Select the right answer from the following options.

1. According to the Lewis Thomas everyone has had at least one personal experience with a computer on______.

(a) purchasing
(b) error
(c) adjustment
(d) using
2. The Fallibility Of Computers are______to be the sheerest blindest accidents.

6. According to the writer, the computer is in, the fact the representative of_______.

9. Which animals do not commit the fallibility as being low-level animals?
(a) lions and leopards
(b) Deer and sheep
(c) cats and dogs
(d) cows and buffaloes
10. Lewis Thomas is famous for his_______in writing essays.

(d) none of these

(a) writing
(b) relaxation
(c) exploration
(d) reading
14. Thomas dreams of a time when the_______will invite the human beings inhabiting this planet.
(a) Other human beings
(b) Mobiles
(c) Computers
(d) Other machines like
15. Thomas hopes that with the help of computer and human beings the______of the coming generations will develop on the map of this world and other planets.
(a) Past
(b) Present
(c) Future
(d) Civilization

Q 1: Who was the Lewis Thomas?
Ans: Lewis Thomas was an American physician, poet, etymålogist, essayist and administrator.
Q 2: Where did he do his work?
Ans: He studied at Princeton University and Harvard Medical School. He became dean of Yale The medical school of medicine.
Q 3: Write the names of Lewis Thomas essays.
Ans: His famous essays books are “Lives of a cell”, “The Medusa and the Snail”, “The Youngest Science”. “Notes of a Medicine Watcher arid the Fraile Species” etc.
Q 4: When did Lewis Thomas born?
Ans: Lewis Thomas was born on November 25, 1913.
Q 5: When did the Lewis Thomas die?
Ans: He died in December 3, 1993.
Q 6: What is computer error?
Ans: Lewis Thomas says that it is common knowledge about the errors of a computer. Sometimes computers send wrong bills or information to us by mistake.
Q 7: How does a computer make a mistake?
Ans: A computer does not make a mistake. But when it does so, it must be due to human error like mishandling or hitting the wrong key.
Q 8: Why does a computer make a mistake?
Ans: computers are the only an extension of the human brain. Computers may make mistakes, as they are man-made.
Q 9: Does the computer has its own consciousness and brain like a human?
Ans:.No, a computer does not have its own consciousness and brain. It cannot think and dream like a human being. It thinks what we put it to think.
Q 10: How do we learn any lesson in our lives?
Ans: Everybody knows that “To Err is Human”. We only then rightly learn by trial and error. It is the secret of our progress.
Q 11: Do the animals also learn from mistakes?
Ans: No, the animals cannot make mistakes, so they cannot make any progress.
Q 12: What do the mistakes make changed in us?
Ans: Mistake makes us humble and learner. Without mistakes or errors, we cannot make progress. Our minds are so designed that they commit mistakes but tend to correct them automatically.
Q 13: How do we make a choice while choosing something?
Ans: We have an open and a vast range of selection-Most of the time we have more than one choice and we have to choose the one Which is the best. This process is called exploration.
Q14: What is the future of mankind and computers?
Ans: The future Of human beings and computers is based on technology and development. The fallibility of computers will pave the way for a better future for both mankind and computers.
Q 15: What should we do for making progress?
Ans: We must give a free hand to the computers because by making one mistake after the another computer can lead us to a method of progress.
Q 16: What the concept of fallibility Of animals is told in the essay?
Ans: Animals like cats and dogs do not make mistakes and have no progress in their lives. They are taught by the man so the fallibility of the animals do not have any effect here.
Q 17: What happened sometimes, when the computer makes a mistake or error?
Ans: Bank balances are suddenly reported to have jumped from $379 into millions, appeals for charitable contributions are mailed over and over to people with crazy-sounding names at your address and department stores send wrong bills, utility companies write that they’re turning everything off, that sort of thing.

1: Everyone must have at least one personal experience with a computer error by this time.

2: Mistakes are a part of the normal behavior/working of a good machine.

3: Computers are representations .of an extension Of the human brain.

4: Mistakes are never at the base of human thought.

6: Misreading is not an important error; it opens away.

7: An argument is there before any decision.

8: We are’sad to have several options to choose from.

9: The lower animals are limited to absolute infallibility.

10: Fish are never flawless in everything they do.

11: Wrong alternatives are needed for going ahead.

12: It is after a big mistake that we are ready to start again.