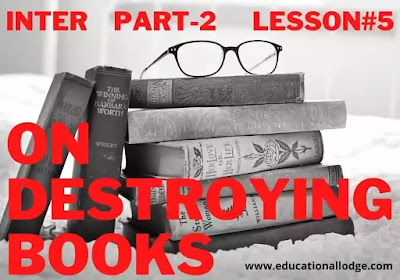 J. C Squire in full Sir John Colling Squire ( 1882-1958) was an English journalist, prose writer, historian, dramatist, a famous poet in Georgeon school, renowned critic and editor. He got an education at Blundell; school and St. John’s College, Cambridge University.
He worked as a literary editor in New Statesman. He was also the editor of the monthly periodical the London Mercury. He chooses unusual topics and turns them into a humorous situation.

J.C Squire has presented On Destroying Books in a simple but beautiful manner and he put the readers in suspense till the end or what is going to happen next. The author wanted to get rid of unwanted books. He starts the story with the reference of news that two million books are being sent to the soldiers.
The books include some ordinary books, old magazines, guides to Lake District, and the back numbers of Whitaker’s Almanac. The writer gives the suggestion that such unwanted books must be destroyed to make space for new books. In his point of view that some non-bookish are hesitant to destroy them and put them into bookshelves.
He feels it the public duty to destroy the books to make more rooms for the new ones. It seemed very difficult for the writer to do so and they may not have as many lives as cats and they die- hard. Sometimes it is hard to search a room to destroy them. He says that once it happened to him, he was living in a multi-storied apartment in Chelsea.
The writer’s apartment was small but there was a huge collection of poetry books that he accumulated during his literary life. The books were of little importance and useless.
Due to the books, the writer wanted to leave the apartment. He was serious to get rid of the books but in his apartment, he had no kitchen to burn the books, and again it was hectic to burn books leaf by leaf in a small fireplace.
He thought deeply about it and took the decision to throw the books into the river. He made a sack and filled it with books. It was midnight when he put the sack of books on his shoulders.
The sky was covered with stars as he stepped into the street. There was a bit cold outside and the streets were blank almost. He walked towards the river. On the way, he met a few people who did not notice the author.
Finally, he reached the bridge near the river, and there, he met across a policeman who was throwing light on the catches of basement windows. He trembled with the fright of being suspected as a thief. But he was not disturbed and could face the investigation. He felt relief when the policeman did not notice him.
He prevented fast walking and by walking slowly, he reached the embankment. On reaching there, he felt the complexities of his act. A few moments later, he heard the voice o the pedestrian’s footsteps but he passed by him quietly. The author was afraid of being caught. But at last, without further delay, he thought about the splash that might attract the people towards him.
He thought that on the voice of splash, people might think of him throwing an illegitimate boy into the river. This was a moment of agony for the writer but he did not lose courage. He walked up and down for a long time. At last, not thinking of the consequences, he threw the sack of books into the river.
There was a loud noise of splash but no one noticed it and there was silence all around. No one approached him and his fear was disappeared. On coming to his apartment, he thought about the books and was ashamed of being harsh with the books. But at last, he consoled himself that he may have room for new books that he would buy soon.

“On Destroying Books” Answers of the Questions

Q 1: What sorts of books were presented by the British public to soldiers?
Ans: Over two million books were presented by the British public to soldiers. Most of the books were ordinary and suitable.
But some odd and unwanted books were also sent which included twenty years old magazines, guides to the Lake District, and back numbers of Whitakers Almanac.
Q 2: was it interest of soldiers that prompted their action, or was It the wish to get rid of useless books?
Ans: According to Squire, it was not the love of the soldiers that people sent books to them. In reality, many of them just jumped at the opportunity to get rid of useless books under the guise of helping the troops.
Q 3: Why should bad books be destroyed?
Ans: Bad books should be destroyed because their destruction not only makes more room for new books but also saves one’s heirs the trouble Of sorting out the rubbish or storing it.
Q 4: Why is it not easy to destroy books / Why is it difficult to destroy books?
Ans: It is not easy to destroy books because they may not have as many lives as a cat. But they are certainly die hard and it is sometimes difficult to find a scaffold for them, It is a difficult task which once brought the writer almost within the shadow of the Rope.
Q 5: Why could not the author burn unwanted books?
Ans: He had no cooking range, so he could not toast them on a gas cooker or consume them leaf by leaf in his small study fire. He knew that it is almost hopeless to try to bum a book without opening it because of its hard covers.
Q 6: How did he decide to get rid of them?  How did the writer take the books to the river?
Ans: He decided to get rid of his books as people get rid of kittens. He stuffed them into sack-like kittens and threw them into the river during his midnight venture.
Q 7: Describe the author’s midnight venture to throw the books In the river and the suspicion which his action were likely to arouse.
Ans: It was nearly midnight when he stepped out with the sack on his shoulder. A policeman passed and he trembled with the fear that he might take him for a thief or a killer.
He reached the bank, looked around, felt fearful of the investigation but somehow gathered courage, and threw the books into the river.
Q 8: How did he muster up the courage, at last, to fling them into the river?
Ans: He was nervous and could not throw them for quite some time. At last, he mustered up the courage calling himself an ass and a shrinking contemptible coward. Finally, he took a heave and dropped the sack.