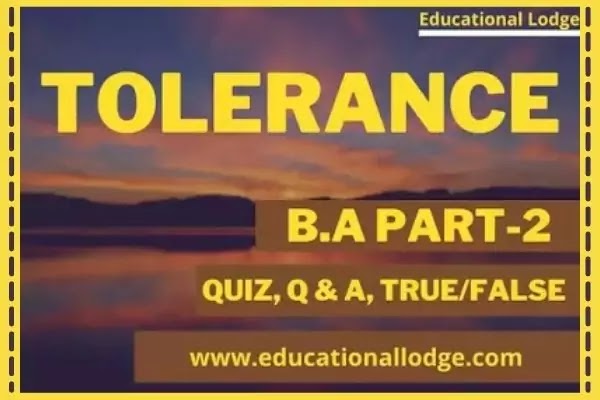 select the right answer from the following options.

1. What is the thing required for the rebuilding of civilization?

2. The essay “Tolerance” is basically a speech delivered by E.M.Forster form

3. According to the E.M Forster, who is the enemy?

4. What kind of flat was where the Forster lived?

10. By whom the inscriptions had been set up for spreading mercy and mutual understanding?

12. Who were not in favor of tolerance?

13. Who stood apart from the religious fanaticism of the Reformation.

14. ______wrote many essays for the importance of tolerance.

15. A book named “Modern Symposium” was written by______which might be called the Bible of Tolerance.

16. Who was in favor of tolerance in Germany?

17. ______has been tried throughout history but it has always failed.

18. Although people think that tolerance is_____virtue yet it is necessary.

20. According to the Forster the first state of mind that people may adopt is:

21. According to the Forster the Second state of mind that people may adopt is:

22. According to the Forster the third state of mind that people may adopt is:

(a) tolerance
(b) favor
(c) point out fanaticism
(d) fight

1.  Everybody is talking about reconstruction.

True
False
2. Surely the only sound foundation for a civilization is a sound state of mind.

False
3. Love is not a great force in private life: it works in public life.

False
4.  We can only love what we know personally.

True
False
5. A civilized future may be built on love and its propagation.

False
6. Reconstruction is unlikely to be rapid.

True
False
7. The writer believes that he can love his enemies, like Germans,

False
9. St. Paul and Dante did not do what Asoka, the great, did.

True
False
12. Goethe was a German.

Q 1: Who was the E.M Forster?
Ans: E.M Forster was an English novelist, critic, and essayist whose works have been translated in twenty-one languages.
Q 2: What was his view in his writings?
Ans: He was a true humanist and a good thinker. He had a great relationship with humanity that was his central them of his writings.
Q 3: Which policy had been given by him for the rebuilding of the United Kingdom?
Ans: He recommended the policy of peaceful co-existence and tolerance in human relations, communities and nations.
Q 4: Which are his famous works?
Ans: His famous work includes “Where Angels Fear to Passage to India”, and “Tolerance is taken from his collection, “Two Cheers Democracy.”
Q5: When did the E.M Forster born?
Ans: E.M Forster was born in middle-class Family in January I, 1879.
Q 6: When did the E.M Forster die?
Ans: He died in June7, 1970 due to bad tuberculosis.
Q 7: When did he serve as a soldier?
Ans: In the first World-War, he served in the international Red Cross, in Alexandria, ‘Egypt.
Q 8: Did the E.M Forster work as a broadcaster?
Ans: Yes. he did. He had also been a successful broadcaster on SSC Radio.
Q 9: What the main thing is required for the rebuilding of the civilization of the world?
Ans: According to E.M Forster tolerance is the only virtue on the basis of which we can re-build the civilization of the human world.
Q I0: Who were planning• for the rebuilding of England after World War -2?
Ans: After the Second World War, British statement, architects contractors and economists were planning for the reconstruction of the country.
Q 11: What the thing is required for construction?
Ans: According to the E.M Forster there is a need for a sound state of mind for reconstruction. Most of the people believe that the world can be reconstructed on the basis of love.
Q12: Why does the Forster give the importance of tolerance over love?
Ans: Forster gives the importance of tolerance over love because he says that love is a great force in private life but in public affairs love does not have its impact.
Q 13: How do you define ‘Tolerance’?
Ans: Tolerance is an attitude of someone which means putting it up to other people. But the tolerance is boring and negative virtue as compared to love. We cannot love strangers but tolerate their kind of at.
Q14: How should-we use tolerance in our lives?
Ans: For this purpose, we should not be huffy, touchy, irritable and revengeful in our relations with others. We should leam to put ourselves in other’s place We should also learn to eradicate the fanaticism In
ourselves.
Q 15: Who opposes the tolerance?
Ans: Nobody opposes tolerance. No one has raised a slogan against tolerance. Because tolerance is the sound state of mind.
Q 16: What do the main things create disharmony?
Ans: There are many factors that create disharmony between people and other, These factors are color, creed, caste, religion, etc. So for removing such disharmony the tolerance must be practiced.
Q 17: Where is tolerance needed for?
Ans: Tolerance is needed at every place. Tolerance is needed in queues, at the station, on the telephone, in the street, in the office, at the houses, and above all between classes, races, and nations.
Q 18: According to the E.M Forster, who was in favor of Tolerance?
Ans: Asoka, Erasmus, Montaigne, John Locke, Sydney Smith, Goethe, and Lowes Dickinson were in favor of tolerance.
Q 19: According to the writer, who was not in favor of tolerance?
Ans: St.Paul and Dante were not in favor of tolerance.
Q 20: How far is important?
Ans: Tolerance should not be taken as a weakness. It does not mean to accept your defeat or surrender. We can rebuild our civilization on the basis of applying tolerance in our lives.
Jul 21, 202039 Comments on Tolerance By E.M Forster Lesson13 MCQs True False Short QuestionsUncategorized