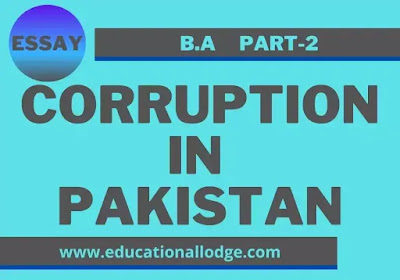 Corruption in Pakistan is rampant, especially in government and lower-level departments. It is a notable hindrance to the progress and prosperity of Pakistan. Corruption in Pakistan has impaired it completely and becoming a cause in an increase in poverty, hunger, and unemployment.
The word corruption is taken from the Latin word “Corruptus” which means corrupted. Corruption being a global endemic is the worst social evil. It is spread all over Pakistan It is called a method that people adopt to bypass the rule of law and has eaten away the whole political, social, and economic system.
Corruption in Pakistan has put the whole society into turmoil. Pakistan is at a high risk of corruption. Corruption is a mother of all evils that leads to other evils like nepotism, favoritism, and transparency. Since the birth of Pakistan, it has been a big hindrance to the progress and prosperity of the country.

Corruption is a true enemy of development

Although there are various institutions that are trying to curb corruption in Pakistan, yet it is still not easy to control it. Pakistan is geographically surrounded by unlimited valuable natural resources. The Transparency International(TI) Corruption Perception Index shows Pakistan as 117th out of 180th most corrupt countries.
In spite of the population of 207 million, it has minimal GDP that ranks at 147th number in the world and is lagging behind in all the fields of life. Ineffective government bureaucracy together with the high levels of corruption presents significant barriers to business in Pakistan.

It is responsible for lawlessness, disorder, injustice, turmoil, frustration, and anarchy. It not only ruins the institutions and the system but also brings about deteriorating. There are many causes of corruption including political, social, and economic causes.
Corruption in Pakistan involves all unsuitable and selfish exercise of power. In Pakistan, corruption has become a way of life and acquired a new dimension and respect. Many of our civil servants are dismissed by corruption charges.

Corruption is like a ball of snow, once it’s set a rolling it must increase

Politically, it depends upon people’s awareness, customs, education, contention, and culture. Every government since the regime of Ayub Khan has patronized and promoted corruption. At present, corruption has become an art practiced and patronized by every haughty and mighty in Pakistan.
It is being pursued most dishonorably without any fear and accountability by the powerful and influential people. Today, unfortunately, the pace of corruption is promoted by the very leader who claims that his first and foremost duty is to combat and eradicate it.
Socially, corruption in Pakistan has eaten away the social structure and fabric of society. It is widespread and rampant everywhere. It always starts when opportunity and inclination clash together. This is the main cause of deteriorating the situation of the country. People of the country have become morally and socially degraded.
They ignore the values of society and incline towards corruption. The reason is that they have low income and fewer resources but the dearness is so high that made the basic necessities of life impossible to get. Along with this, the competition of status is increasing and people’s demands are skyrocketing.
Economically, corruption is affected by the economic environment. If economic activity is regulated and limited, the officials get more authority and there are more chances of corruption. To avoid restrictions, they pay or offer payment to perform their tasks. It is also influenced by monetary policy.
The states with the regulated and disciplined monetary system are less inclined to corruption. Countries with economic and political freedom are also less corrupted. Low salaries of government employees take them to corruption and to improve their economic position.

Countries with high-level corruption are unable to function properly especially on the economic level. They cause suffering to society. Corruption affects us deeply and threatens sustainable economic development, moral values, and justice. It makes society unstable and demoralized.
Corruption in Pakistan destroys all the institutions and values of democracy. Such action of corruption deprives the citizens of their basic rights. Corruption eats away the nation’s wealth and it leads to uneven distribution of wealth.
Small businesses face unfair competition from large organizations that develop illegal connections with government officials. In corrupt countries, resources are used inefficiently. The quality education and health care also deteriorate under such circumstances that lead to low-level standards of living.
Summing up, to curb corruption in Pakistan is very difficult but can be controlled if all the organizations and govt institutions work honestly. The salaries of the employees must be good to meet the necessities of life. Institutions must be according to the rule of law. Accountability is essential to curb and control corruption.

The worst disease in the world today is corruption. And there is a cure transparency

36 thoughts on “Corruption in Pakistan | Essay for B.A English Part-2”