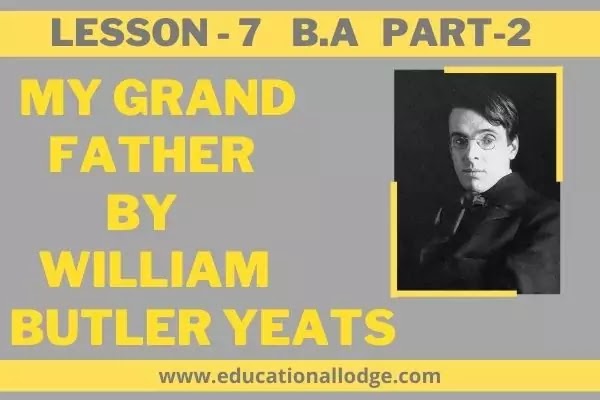 W.B.Yeats (1865- 1939) was an Irish poet, dramatist, and statesman. He was born in Sandymount, County Dublin, Ireland. His father was a descendent of Williamite soldier and his mother belonged to a wealthy Pollexfen family in Sigo who was in the shipping and milling business.
Yeats abandoned law and studied art at Heatherley’s Art School in London. His family was highly artistic. Yeats is generally considered one of the key English language poets in the twentieth century.
He was a symbolist poet and his words usually connote the abstraction of thoughts. The Countess Cathleen, The Land of Hearts’s Desire, and The Wild Swans at Coole are some of his plays. He wrote countless poems also and was considered a highly imaginative poet.

My Grand Father is an extract from the writer’s autobiography. It is an account of his pleasant and unpleasant memories of childhood. Yeats tells us about his unhappy past. The essay also throws light on the personality and character of his maternal grandparents.
As a schoolboy, he often spent the summer holidays with his maternal grandparents. His grandfather was William Pollexfen. Yeats was quite afraid of his grandfather. Though his grandfather never spoke harsh words to him.
He often confused him with God and prayed that he might punish him for his sins. His grandfather’s favorite books were The Bible and The Falconer’s Shipwreck.
Yeats’ grandfather belonged to an old Cornish family. He was retired from the army. His mother was a Wexford woman.
His family had been linked with Ireland for generations. William Polexfen had no relatives because he was the only child of his parents. In this way, he led a very isolated life. He had a collection of antiques from different parts of the world.
The writer had to live with his grandfather and he developed certain baseless and unreal fears as well as his loneliness. His uncles and aunts were good with him. It was rather traditional and customary to obey grandfather.
Yeats’ grandfather did intend to impress even the members of his family with his past deeds. Once something went with the rudder of a ship. The captain and the crew refused to go into the water. He himself dived from the deck into the sea.
When he came out, his skin was all torn but he had found the cause of the trouble. William Polexfen had won freedom for some Spanish cities, but he was so silent that he did not mention it to his wife till he was eight.
The writer describes his grandfather as an experienced shipman, physically stout, strong as well as bold, and courageous. Yeats states that his grandfather was an extremely tough and honest person.
Being a person of a violent nature, he expected others in the house to adhere strictly to discipline. However, he was a naive man of simple habits and not clever at all. Because he failed to see through the cleverness of others and was not able to restrain what was actually happening.
To illustrate an example of his naivety. Yeats has stated an incident of his helplessness. Once Yeats’ uncle called him out of the bed and sent him to borrow a railway pass from a cousin. The grandfather possessed a railway pass but he did never it to anybody to misuse it.
Yeats’ grandfather went on a horse in the moonlight and returned home early in the morning at two or 3’o clock. This incident throws ample light on the innocence of grandfather. Yeats’s grandmother was a gentle, kind, and polite lady.
She had sympathy for all human beings. She distributed clothes among the poor and the destitute people. She was very fond of handiwork and painting.  She hung the painting and pictures of the war of China on the walls. Unlike her husband, she had a refined and sober disposition.
She knew that her husband had great physical power and he kept a hatchet beside his bed to deal with the thieves. so she went about the night with a candle in her hand to see if any thief had been hit by her husband or not.
Once she punished the writer in order to teach him good manners. The writer was playing in the kitchen and a servant pulled his shirt out of his trousers. He was accused of childish indecency. He was given his dinner in a room by himself. later, he knew that all his fears were baseless.

Questions and Answers | My Grand Father

Yeats’ impression of his grandfather or Yeats’ childhood Fears

How far would you agree that the childhood memories of W.B. Yeats reflect the anxiety and fear of children in general?

What are Yeats’ impressions of his grandfather as are written in his essay?

My Grandfather is a nostalgic account of the writer. He used to visit his maternal grandparents and he tried to share his childhood experiences with the readers in the autobiographical note. He remembered his days with a heavy heart because he got afraid of his grandfather.
The author had resided with his maternal grandparents in his childhood but always was frightened of his grandfather as it was a custom to do so. He was also scared of his uncles and aunts. Although his grandmother was a kind lady yet she had punished him for his harmless act and gave him a meal separately.
Breakfast and mealtime were 9:00 A.M and 4:00 P.M respectively. Once his uncle rebuked the writer when he saw him eating between the meal. On this, the writer admitted that he was a very unhappy child.
Small howlers made him feel guilty and a sinner. He felt that punishment was hanging on his head all the time. He thought of his grandfather as a god but he was much fearful of him. Moreover, he had little company in his grandfather’s house.
There were no children of his age to play and talk to him. All elders were unable to understand what he thought and what he needed. He was a timid fellow and did not have the courage to say what he wanted.
With the passage of time, Yeats overcome all these fears and pains. He began to love his grandfather and other members of his family. However, he believes that grown-up people do not try to understand the children’s problems. These all added to the unhappiness in children.

The essay consists of Yeats’ memories of his grandfather. William Pollexfen was the grandfather of the writer. He was physically very strong and bold but not very intelligent and clever. He possessed some qualities which are elaborated in the essay.
Yeats’s grandfather possesses a strong physique and stout body. He never ordered a man to do any work which he himself did not do. He had liberated a Spanish city in his youth but never boasted about it. William Pollexfen was the owner of many ships.
He went on a sea voyage when he was only a boy. He knew everything about ships and seas. Once he something went wrong with the rudder of a ship. The captain and the crew refused to go into the water. He himself dived from the deck into the sea.
When he came out, his skin was all torn but he had found the cause of trouble. He had a cabinet that contained pieces of coral, Chinese pictures, a jar of water from Jordan, and an ivory stick from India. He was very vain and disliked his neighbors.
He kept a small axe by his bed at night to deal with the thieves and burglars. His wife knew his temperament and was always afraid of him. In short, we can say that William Pollexfen was a great personality in the life of Yeats.
Sep 13, 202027 Comments on My Grand Father by William Butler Yeats Lesson 7 BA Part 2 PU SyllabusUncategorized