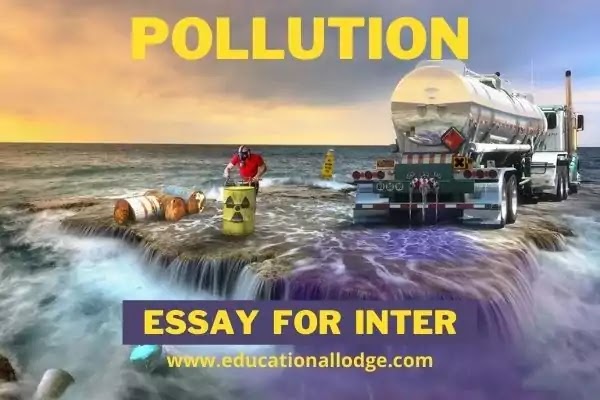 Pollution means contamination of the earth’s environment with material that interfere with human health, the quality of life, or the natural functioning of ecosystems( living organisms and their natural surroundings).
Although some environmental pollution is a result of natural causes such as volcanic eruptions, yet most are caused by human activities. People are violating nature in various ways and producing pollution everywhere.

Pollution exists in many forms and affects many different aspects of the environment of the earth. Different specific, localized, and identifiable sources such as sewage pipelines, or industrial smokestacks cause much pollution in the society.
Another kind of pollution comes from dispersed or uncontained sources, such as contaminated water runoff from urban or automobile emission. Contamination of the earth’s atmosphere that human beings create can take many forms.
It has existed since humans first begun to use fire for agriculture, heating, and cooking. It can be seen in the indiscriminate cultivation of land, the destruction of forests, and the annihilation of active species.
Man’s voracity(greed) has upset the balance of nature. Although earth provides enough for the satisfaction of every man’s need, yet every man’s greed is not ended. Urban air pollution is commonly known as smog. Air pollution has developed into a major health hazard in modern times.

Pollutants building up in the atmosphere cause sulfur and nitrogen oxides conversion into acids that mix with rain and it mixes in lakes and falls on forests, where it can become the cause of the death of fish and decay of plants, and damage the entire ecosystem of the universe.
One of the greatest challenges caused by air pollution is Global Warming, an increase in the earth’s atmosphere due to the build-up of certain gases such as carbon dioxide. With the heavy use of fossil fuels in the modern era, the atmospheric concentration of carbon dioxide has risen dramatically.
Water pollution contains sewage, industrial wastes, and agriculture chemicals such as fertilizers and pesticides. In developing countries, more than 95 percent of urban sewage thrown into rivers and bays, creates major health issues.
Water runoff, a major source of pollution, carries fertilizing chemicals such as phosphate and nitrates from agricultural fields and yards into lakes, streams, and rivers. There is Erosion (the wearing away of topsoil by wind and rain), also causes water pollution.
Silt and soil washed from broken hillsides, plowed fields, or construction sites can block water paths and kill aquatic life. Soil contains mineral, plant, and animal materials that are created during a long process that may take thousands of years.
Much noise and unwanted sounds produced by airplanes, traffic, or industrial machinery are also a form of pollution. Noise pollution is at its worst in deeply populated areas. It causes hearing problems, stress, high blood pressure, insomnia, distraction, and productivity loss.
The problem of pollution and other environmental hazards calls for immediate measures to save the future generations from the devasting predicament of pollution. We must maintain and establish a beneficial relationship with the rest of nature.
Our connection with earth may not pollute the earth’s atmosphere to such a great extent that deformed human beings are only left to enjoy the prospects of the industrial and technological progress. We must acknowledge the sanctity of earth.

The only solution to pollution is human revolution