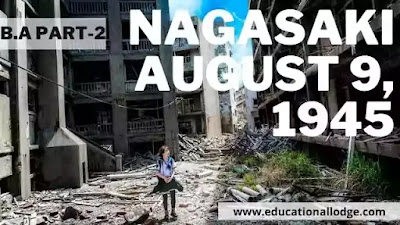 Michaito Ichimaru ( not known- just reporter and survivor) is one of the most realistic and eye-opening narrators of the post-WWII (Second World War) era. He belonged to the city of Nagasaki, Japan and during WWII, he had been the medical student at the Nagasaki Medical School. He was a very dedicated and devoted student.
He had gone through many trials and tribulations during his lifetime. One of the most unfortunate tragedies of his life was the nuclear explosions that took place not only in his glorious city of Nagasaki but also in another grand city of Hiroshima. Both cities were severely affected by those devastating atomic bombs.
Ichimaru had been the sad witness of hundreds of thousands of victims who lost their precious lives in those explosions. He had reported about those destructive events and the miseries of the innocent people in a true manner.

In this essay,  the writer describes the destruction caused by the atom bomb, dropped on Nagasaki, a city of Japan on August 9, 1945. The atom bomb was dropped at Nagasaki by the Allied Forces (America, Britain, and France) during the Second World War.
The writer of the essay gives many details of horror and the destruction of Nagasaki during the bombing.

The bombing took place on August 9, 1945. It reduced the whole city of Nagasaki. The writer was a first-year student at Nagasaki Medical College. August 9, 1945 was a clear, hot, and a shining day.
The writer was sitting in his room with a fellow student. Suddenly, he heard the sound of B-29 aircraft. The writer and his friend were They ran downstairs to the toilet-to hide themselves. The writer lost his senses.

When the writer came to senses, his shoulder was bleeding. The roof of the house was blown up. The sky had converted from blue to black. Black rain started to fall.
The stone walls between the houses were reduced to dust. The air was full of radiation. After a short time, he went to medical school at Urakami. There was a fire burning everywhere. Many people were coming back from Urakami.
Their clothes were in rags and skin was torn and hanging from their bodies. They looked like ghosts with blank eyes. All the buildings were destroyed. Only the skeleton remained standing, The dead bodies were lying everywhere.
The wounded were crying for water but they died without it. Near the school, the writer saw the charred bodies of men and women. The writer could not get rid of the sounds of the crying women in the destroyed field.
A dead horse with a bloated belly lay by the side of the road. Trees, plants, and green areas were burnt to ashes. The writer gave his own opinion about the destruction.
The writer says that he is unable to describe the actual pain of victims. The parents and the relatives of the dead people were gloomy. Most of the writer’s class fellows had died.
Those who left alive fell down and died in the coming weeks. The medical students, doctors, nurses, and patients, who had escaped were crying for water.
There was no water anywhere. It was the most horrible scene of death destruction. The writer concludes that such destructive nuclear weapons should never be used in future

The writer gives a detailed description of destruction caused by an atom bomb. The bombing took place on August 9, 1945. It reduced the whole city of Nagasaki to rubbles.
Allied Forces dropped the nuclear atom bomb on Nagasaki. The writer was a first-year student at Urakami Medical School. On August9,1945, he was sitting in his room with his friend and class fellow.


At 11 a.m, I was sitting in my room with a fellow student when I heard the sound of a B-29 passing overhead.

Suddenly he heard the sound of B-29 aircraft overhead. A few minutes later, the air flashed and there was a huge blast of wind. The writer was terrified. He ran to the toilet to hide.
He lost his senses. When he came to his senses, he saw that the glass had cut his shoulder and he was badly injured. The sky was had turned from blue to black and the black rain started falling.
Stone walls were reduced to dust. After sometimes, he went to his medical school at Urakami. On the way to school, he met many people. They were coming back from Urakami.
Their clothes were in rags. The shreds of skin hung from their bodies. They were looking like ghosts with blank and vacant eyes. There were dead bodies everywhere on each street corner.


As I got nearer to school, there were black charred bodies,   with the white edges of bones showing in the arms and legs.

There were tubs of water to put fires after the air raid. In one of the tubs of water, there was a dead body. The wounded men, women, and children were crying. Many charred bodies of men and women scattered in the field.
A dead horse with a bloated belly lay by the side of the road. When the writer reached his school, he saw many of his classmates had died. Those who were left alive fell down and died in the approaching weeks.
We can conclude that the loss of life and property by that air raid was unexplained. The writer shows his complete hatred against the use of nuclear weapons.

Never again, should these terrible nuclear weapons be used no matter what happens.

The writer thought that the souls of his friends would be in rest in peace in the graves If the nuclear weapons are not used in the future. The whole scene of devastation can be expressed through the words

Theme /Moral of the essay

In this essay, The write Ichimaru gives us graphic details of the destruction which the bomb blast caused during World war II. America dropped the bomb on Naga, a city of Japan.
Its aim was to make an end to the power of japan. It caused massive destruction. Men, women, and children were killed miserably. The whole city was reduced to dust.
The writer is against the use of nuclear weapons. In his view, the use of nuclear weapons is very harmful to mankind. It does not cause the death of a few hundred and thousand people.
It is the death and destruction of the whole society. it is the death of the future of the upcoming generation. The writer suggests that the nations of the world should decide their problems through negotiations.
They must have peaceful talks. Man’s knowledge of science should not be used for the destruction of mankind. The writer’s depiction is the picture of destruction and misery caused by the atom bomb is really very effective.
We agree with the writer in his mission to put an end to the use of nuclear weapons. He believes that the victims of Nagasaki will lie peacefully in their graves, if the world stops the use of atomic weapons.
By laying down this thesis, Ichimaru reveals a rare political insight. Since the destruction of Nagasaki and Hiroshima, the world powers are afraid of using nuclear weapons in the war.
They have decided not to allow anyone to use nuclear weapons even what may happen. The writer finishes his essay by giving his own views on the deadly results of nuclear war. He prays for the people.

Only when mankind renounces the use of these nuclear   weapons, will the souls of friends rest in peace.