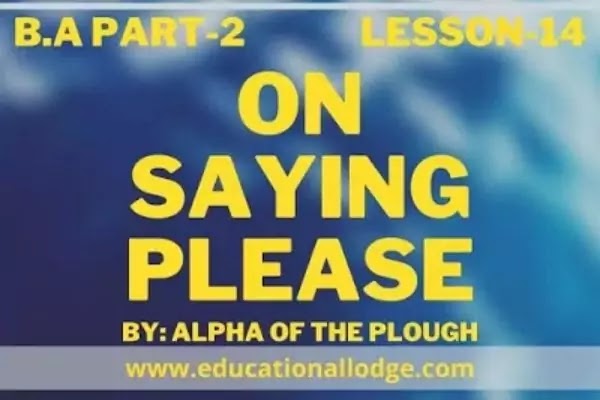 ON SAYING PLEASE Lesson #14 (Alpha of the Plough)

MCQs: Select the right answer from the following options.

4. In the essay ” On Saying Please” the writer has presented the difference between moral laws and______.

5. Whom has the writer given example as a polite man?

6. What did the liftman do with a man who wanted to go up?

7. What happened after the man was thrown out the man from lift?

8. Why did the liftman, throw the man out of the lift?

12.According to the writer pain can be removed but________can not restored.

14. Who did not charge the fare to the writer?

(a) discourtesy
(b) courtesy
(c) impoliteness
(d) none of these

Q 1: What does the liftman do with a man and why?
Ans: A young lift-man throws a man out of his lift for not saying “please”
Q 2: What is the punishment given to the liftman?
Ans: That young man is not punished physically but he is fined as he has committed violence.
Q 3: What is the law against discourtesy?
Ans: There’is legal Law against discourtesy. Bad manners are also based on morals, so the law does not compel anyone to say” please”.
Q 4: Can laws be bound to someone for being courteous?
Ans.‘ Although the laws protect people against violence and physical attack yet they don’t bind the people to say courteous words. So the negation of etiquette does more harm than criminal offenses.
Q 5: How the feelings are affected by harsh words?
Ans: A person may forget any physical injury but he cannot forget if his feelings are injured.
Q 6: Why are the bad and good manners infectious?
Ans: It is true that bad manners are much infectious but good manners may be infectious also. Because they pass from one person to another and influence that whole society.
Q 7: How are the little courteous words rare?
Ans: Little courteous words like “please” and “Thank you” can make our life sweet and pleasant. We can win the hearts of other people by these little courteous words.
Q 8: Whqm does the writer give an example?
Ans: The Writer Alpha gives an example of a very courteous and good-humored bus conductor, who met him in a polite manner.
Q 9: What impacts do the bad manners pour to life?
Ans: Bad manners make life sad and dull. Bad manners are as much harmful as poison. These poisonous manners are worse than all the crimes Of the world.
Q 10: How do you define a courteous and polite person?
Ans: A courteous and polite man always gains spiritual and moral victory over those who are impolite.
Q 11: Who was Alpha of the Plough?
Ans: Alpha is an English journalist, biographer, and essayist. He remained Editor of “Northern Daily Telegraph”. He also joined “The Star” an essayist after splitting from ‘Northem Daily Telegraph”.

1. The liftman threw a man out of his lift because he did not say “Please”.


True
False
4. The writer tells us in detail about a “good’! conductor.


True
False
5. The “good” conduct& often stopped the bus without a station.


True
False
6. The writer’s most sensitive cat was trampled on by the“good” conductor.


True
False
7. The “good” conductor had an ease with which he got through his work.


True
False
8. “Nothing clears up my spirits like a fine day,” said Keats.


True
False
9. War has had a chilling effect upon . little everyday civilities of behavior that sweetens the general air.

10. The law can only protect us against material attack.

True
False
11. The writer tells the story of Chesterfield to the liftman
True
False
Jul 23, 202050 Comments on ON SAYING PLEASE By Alpha Of The Plough Lesson-14 | Quiz QuestionsUncategorized