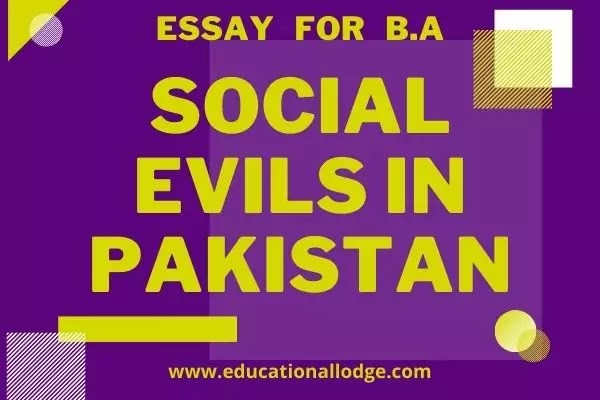 In a society where class distinction and the ferocity of wealth are common among the people and all are included in a race of materialism. Everyone intends to amass money by every hook and crook. They violate all the moral and social values and exploit others in the attainment of wealth.

Pakistan is a democratic country. It is one of the major Muslim countries in the world. It comprises people of different casts, communities, and religions. Here people have different religions, customs, traditions cultures, habits, and thoughts.

All people have their own social concerns. Sometimes, their habits, temperaments, and behaviors are unbearable to one another. They create disturbance in a society for the satisfaction of their own desires. They create many social issues to destroy one another.

I think of it all as a test. This is a moral examination that one has to pass…to stand up against such social evils

For these reasons, there are many social problems in Pakistan. With the passage of time, all evils and social wrongs are increasing in our society. We can discuss social evils one by one. Firstly, corruption is the first greatest social evil in Pakistan.
People do so for the benefit of others. They use illegal sources to take benefit from others. They take bribes from the people to provide them illegal facilities or things. They do not feel ashamed to earn from illegal sources.
Secondly, smuggling is the second major evil in Pakistan. It provides many financial benefits to the smugglers. Smugglers carry cheap things to a country where they sell them at high prices.
Thirdly, the dowry system is a great curse and social evil in our country. It has disturbed the peace and happiness of the poor people. In the past parents were very simple. They gave dowry to their daughters at the time of their marriage.
They considered it a gift. Now it has become fashions and essential to give dowry. Many girls remain unmarried because their parents can not give dowry. So there is a dire need to eradicate this social evil from our country.
Fourthly, terrorism is one of the greatest social evils in our country. Terrorists use force and threat masses, groups, and governments for their own benefits. They try to damage the important government buildings, offices, and public places like railway stations, mosques, shrines, airports, etc with the bomb and destructive weapons.
They use innocent people as a tool to fulfill their own purposes and they annihilate them on a massive scale without considering their lives. They are the men without consciences
Fifthly, drinking, and gambling are the burning social evils of our society. Besides, some people have formed the habit of taking drugs. There are drug addicts and drunkards who spoil their health and become unfit for any physical work. They become abundant in their families.

There are enormous other social wrongs like bribery, nepotism, black marketing, forgery, swindle, jobber, and social injustice in our society. Our beloved country is also the prey to adulteration, beggary, hoarding, human trafficking, drug addiction, drug trafficking, and gambling.


Apart from these specific social evils, social injustice can also be seen in Pakistan. To maintain social sustainability, it has become pivotal to eliminate the social evils of our country, we must be determined to fight against them collectively.
Now we are living in a digital era where everyone comes to know everything within seconds. The role of media especially social media is significant that can highlight these societal problems and can attract higher authority’s attention towards them.

Pakistan can be stable and free from many of the dangerous social evils if all the political, social, educational and government departments are better, For this individual, as well as collective iron hands, are essential to curb them.

Mere political reform will not cure manifold evils which now afflict society. There requires a social reform, a domestic reform, an individual reform