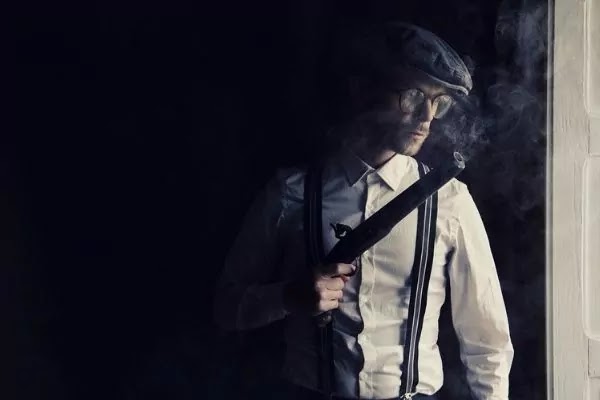 Ernest Miller Hemingway ( 1899-1961) was an eminent novelist, short-story writer, and a war correspondent of the U.S.A. He belonged to a well-educated family. His father was a doctor by profession whereas his mother was well-versed in music. He got his name from his maternal grandfather, Ernest Hall.

He began to show great flair for writing in his school years and he used to contribute to his school newspaper. He also used to edit his high school yearbook. He was always enamored by Spanish culture.
In the early ’20s, he began to write seriously and settled his unique recognition among his readers through his realistic and simplistic style of writing short stories. Most of his literary work centered upon the themes of death, uncertainty, love, depression, despair, and other complexities of life.

His famous novels were A Farewell to Arms., For Whom the Bell Tolls, The old man and the Sea, The Sun Also Rises, etc. He received several national and international awards including Nobel Prize in 1954. He committed suicide by shooting himself in the mouth with a twelve-gauge shotgun in 1961.

The story began when two killers Al and Max entered the Henery’s lunchroom at 5 P.M. They ordered those dishes which could only be served at dinnertime. They were strange-looking persons.
The faces of the killers were different but they were dressed alike. They wore overcoats too tight. They were very rude in their behavior from the very beginning of the story. They ordered George to bring roasted ham with eggs and potato chips to eat.

The killers made fun of both Nick Adams and Sam. Al took Sam and Nick into the kitchen by taking a revolver and tied them back to back. Max informed George that they had come there to kill a heavyweight boxer, Ole Anderson.

Al and Max had the necessary information about Ole Anderson that he usually came in the same lunchroom for dinner at 6P.M. Max told George that they did not see Ole Anderson. They had no personal enmity with him.

They wanted to kill him just to oblige their friend. At that time Max ordered George that if any customer would come there,  he would put him off by saying that the cook had gone out.

It was quarter past six when the door from the street opened and a customer came in the lunchroom. George told him that the cook was not present and he could not serve him dinner. After some time two more customers came and ordered the dinner.

George himself served them. However, after waiting for more than two hours the killers became disappointed and decided to postpone their plan temporarily. After their departure, George united Sam and Nick who were tied back with a towel in the mouth of each.

George disclosed to them that the two killers wanted to kill Ole Anderson. He suggested Nick Adams to go immediately to inform Anderson about Al and Max. Nick went to the house of Ole Anderson.

He met Mrs. Bell, the housekeeper. She guided him the room of Ole Anderson. Ole Anderson was lying on his bed, turned to the wall. Nick informed him about the two killers. Ole Anderson received the news quite calmly.

Ole Anderson thanked Nick for providing him information about the killers. Nick offered to co-operate with him if he wanted to report the matter to the police. Ole Anderson refused to contact the police. Nick proposed him to leave that city to save his life.

But he told Nick that he had been running from place to place for a long time. Now he would face his enemies courageously. He seemed to have accepted his fate. He was tired of life and knew that the killers would not spare him.

It was the basic reason that they wanted to kill him. Ole Anderson was a great fighter but in spite of that, he was truly a noble and loveable person, who did not like to harm anybody. The story ended with the sad feelings of Nick for Anderson.

Elaborate suspense and horror in the story The killers.

“The killers” was written in 1920. It was a time when organized crime in America was rampant during the prohibition. The Killers is a story about anonymous people nearly in an anonymous setting. They leave the place but also leave behind them a looming shadow of death and horror.
The story deals with Hemingway’s theme of suspense, horror, and terror. The story starts with horror and suspense and ends with the same theme. Even the title the killers reflects that some murder or killing is going to happen but actual killing does not occur in the story.
The setting of the story was Henery’s lunchroom. It was located in a small town, Summit. It was a common place for visitors. The two killers, Al and Max entered Henry’s lunchroom. They created an atmosphere of terror, horror, and mystery.

Their faces were different but they were dressed up like twins. They came suddenly and ordered the waiter George to serve them with heavy food. George refused them because it was not dinner time. So they ate ham and eggs.

The behavior of Al and Max with the hotel attendants was very rude and harsh. One of the killers informed the servants that they had come there to kill Ole Anderson. Ole Anderson was a retired heavyweight boxer.

We’re going to kill a Swede, Do you know the big Swede named Ole Anderson

He often visited Henery’s lunchroom. The killers also told that they had no personal enmity with him. Even they did not see him. They only wanted to kill him to oblige their friend.

We’re killing him just for a friend, just to oblige a friend, bright boy.

Al pushed the cook, Sam and Nick into the kitchen and tied them together. He gagged them with a towel. Al stayed in the kitchen with his gun keeping watch on the servants. Luckily, that day Ole Anderson did not come.

After waiting for more than two hours, the killers became disappointed and decided to postpone their plan temporarily. The two killers left the restaurant but they left behind them a looming shadow of death and horror.

What is the central theme or moral of the story?

The Killers is an interesting short story. In it, both Al and Max were presented as the hired killers. They entered Henery’s lunchroom in a very suspicious manner. They ordered different kinds of food. George told them that the food they were demanding was not available.

The basic theme of the story The Killers is the looming shadow of death. The story revolves around the two cutthroat killers  Al and Max, and their victim, Ole Anderson. They were cruel and savage in their behavior.

They wanted to kill Ole Anderson just to oblige their friend. Though till the end of the story they could not kill them yet they were succeeded to spread an atmosphere of death and frustration.

The second theme of this story is that crime does not pay. Criminals try to escape the circumstances and results of their crimes, but later they have to face all that. In the story, perhaps Ole Anderson had double-crossed someone who had sent these killers.

His crime had put him in a very horrible situation and he was alone waiting for his death. Another theme of the story is based on the courageous nature of Ole Anderson. When Nick informed him about the two killers, he did not show any sign of fear.

He was ready to face them. He would fight with the killers as he had been a champion of boxing. But in spite of that, he becomes a brave person and would change the situation without the help of any person. To conclude, all the themes are very lucid in the story.

I can’t make up my mind to go out, I been here all day.