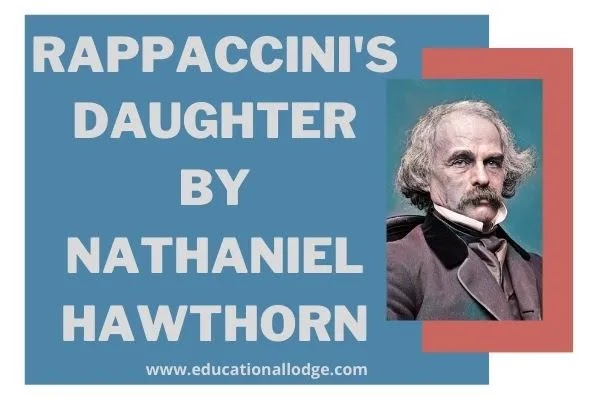 Nathanial Hawthorne ( 1804- 1864) was a famous American novelist and short story writer of the 19th century whose repute rested upon his all-time famous novels, The Scarlet Letter and The House of Seven Gables. His works are mostly based upon the history of his Puritan forefather and new England.
Hawthorne belonged to a well-educated family of lawyers, judges, businessmen, and other men of letters. His father was a boat-skipper. He spent his childhood in copious reading and sound thinking.
He spent his early youth in isolation and this placed him in a good seat as his thinking became mature and ripe for his perspective career in writing. His major literary contributions were Twice-Told Tales, Mosses from an Old Manse, and The Snow-Image.
His way of writing had been very crisp and deductive like that of a scientist. Most of his writings focus on the themes of clas with nature, supernaturalism, death, social injustice, emotional restraint, etc. Hawthorne’s life and writings present a complex puzzle.

Rappaccini’s Daughter is possibly the best known of Nathaniel Hawthorn’s stories. It is a story set in the mid-nineteenth century in Padua, Italy. That period was marked by various scientific discoveries, especially in medicine. This boom led to extensive debate on science and religion.
A young man, Giovanni came to the city of Padua to get a university education. By chance, he rented a room on the upper story of a building adjacent to Dr.Rappaccini’s garden. The window of his room opened in the garden of Dr.Rappaccini.
One day, Giovanni saw a beautiful girl through the window of his room. He fell in her love at the very first sight. She was Beatrice. She was the daughter of Dr.Rappacin. Giovanni managed to have an access to the house as well as the garden through Lisabetta, his housekeeper.
He observed the poisonous touch and breath of Beatrice. One day Giovanni threw flowers towards Beatrice. He observed that flowers withered away when she brought them close to her.
He noticed from his window that an insect died at once when a drop of juice from some poisonous flowers fell on its head. But Giovanni’s love did no decrease though he had observed the deadly power of Beatrice.
Professor Baglioni, a friend of Giovanni’s father, advised Giovanni to beware of Rappacini and his daughter. According to him, Rappacini was busy evolving some dangerous and deadly experiments in Giovanni.
Giovanni, however, neglected his pieces of advice and kept on loving Beatrice. She found comfort in Giovanni’s company, but their happiness was short-lived. One day Giovanni noticed that his own touch and breath also became poisonous like Beatrice.
Giovanni blamed Beatrice for making him the target of her father’s plan and experiment. But she proved her innocence to Giovanni by saying my body, be fed with poison, but the spirit is God’s creature and needs love as its lovely food.
On the other hand, she was totally dejected by her lover for his mistrust, who condemned her honest and sacrificial nature of love. Prof. Baglioni gave a medicine, specially prepared to deliver Giovanni and his beloved to ward-off all poisonous effects and restore them to normal life in the future.
Beatrice willingly offered to take it first show her innocence and taking part in any filthy plan. Beatrice breathed his last when she took a little bit of that. She died because poison had become part and parcel of her life, whereas the prescribed antidote proved fatal for her.

Question 1: What is the theme or moral of the story?

Rappaccini’s Daughter beautifully explains the end and suitable theme. The end of the story rightly justifies its theme. It is quite unnatural and negative thinking to try to gain superiority over others by negative means.
It is paramount to the height of selfishness, gross neglect of others’ feelings, human values, and moral norms. Dr. Rapaccini was crazy about growing poisonous flowers in his garden.
He was working against the normal course of nature, which could not possibly be changed for personal and selfish interests. Nature has fixed laws in the universe, and one has to confine himself within these limits for his ultimate happiness and benefits.
Any attempt to cross the limits can prove disastrous. Possibly, Dr.Rappacine may think of devising ways and manners for breeding a generation of poison-immune people, but the most powerful values of life will ultimately prevail on all such evil designs and negative thinking.
Rappacini’s plan to make the love affair of Beatrice and Giovanni an apparatus of future experiments ended in tragedy. The desire for power as well as the love story ended in tragedy.

Question 2: Character of Dr. Rappaccini in the story

Dr. Rappacini was a great, esteemed medicine doctor at the University of Padua. He was a tall, thin, and sickly looking man. He always dressed in black. Dr. Rappacini was qualified in growing poisonous plants in his garden.

He examined each plant with the greatest care. He worked in his garden with the gloves on his hands and placed a covering over his mouth and nose. The main defect of his character was that he cared more for science than for mankind.

This distrustful gardener, while plucking away the dead leaves or pruning the luxuriant growth of the shrubs, defended his hands with a pair of thick gloves

Sick people were interested in him only as a subject for some new experiments. Even he examined his destructive experiments of poison on his own daughter for the sake of adding to scientific knowledge.
Dr. Rappacini wanted to grow poisonous human generation. He was mistaken in his approach. He wanted to become a worldly god but his own daughter destroyed his all lustful ambitions. Actually, he could not understand his own daughter.
His daughter died on his own feet but he could not save her life. In short, Dr. Rappacine was an intelligent scientist but he used his knowledge for the destruction of human beings.
Actually, he put poison in his daughter so that she might protect herself from others but he ignored the human feelings for companionship. Noticing Giovanni’s interest in Beatrice, he tried to insert poison into Giovanni’s body but his own daughter became his victim.