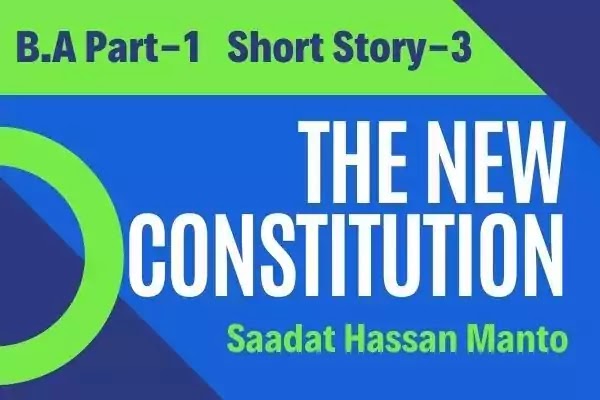 Saadat Hassan Manto ( May 11,1912- January 18, 1955) was a well-reputed Urdu short story writer and playwright of Pakistan. He was also a film and radio scriptwriter and a fearless journalist.
Most of his fame rests upon these iconic short stories such as Bu (odor), Khol do (open it), Thanda Gosht (Cold Meat), and Toba Tek Singh ( Name of a town in Pakistan). He was a prolific writer.
He had produced a large collection of short stories, radio plays, a novel, and several personal sketches. Many of his short stories have been translated into several international languages.
Most of his literary writings centered upon the turbulent circumstances during the partition. Manto had been an outspoken sort of writer. His way of writing used to be very blunt, bold, and sometimes obscene.
He had been a regular visitor of Pak Tea House that had earned the name for being a place of Free Speech among many distinguished Pakistani writers and poets, namely Fiaz Ahmad Faiz, Intizar Hussain, and Nasir Kazmi, etc.
In the later part of his life, he was too much boozed up with alcoholism that his liver broke down and it became the major cause of his death in 1955. He was survived by his wife, Safiya, and three daughters at the time of his death at 42.

A nation may be weak or backward but national liberty is very sacred to it. Foreign rule is always condemned and hated. Foreigner rulers should, therefore, never expect love from the ruled. The English were always very fond of ruling over the whole world.
It was a time when India was one of their colonies. The English rulers in India were absolutely callous and cruel to the natives of India. In return, the natives also hated them the cores of their hearts. The new constitution by Manto also exposes the same situation.
It was being hoped that Government India Act, 1935 would bring about great political and social changes for the inhabitants of India. The story was written in 1938, and by then it was fully realized that the new Act of 1935 had brought nothing to change.
The story reflected that Manto joined the group of anti-imperialist struggle by the fact that the British had to face hate in the United India because of their unjust racialism and colonialism, and bigotry.
Ustad Mangu whose reputation as a knowledgeable man was well established among his fellow tongawalas waited anxiously for the promulgation of the Act to celebrate his freedom from the British.
He had a thought that his rights being a human being as well as a citizen of India would be accepted and recognized in the world. Ustad Mangu was a completely illiterate person, still he was considered to be the wisest person among his fellows.
It was because that he was always ready to satisfy the fellows about what was going on in the world. He hated the British because he believed that they were ruling the country against the will of the Indians.
The gora soldiers belonging to the cantonment area were responsible for his poor opinion about the British. They treated him worse than animals. He hated them very much. Once he had a bitter quarrel with a gora soldier, he remained depressed for many days.
He could not bear even the sight of them. One day, he picked up two fares from the district courts. He gathered from their conversation that there was going to be a new Act for India which would be enforced from the first of April.
At last First April came. He was very excited and prepared his Tonga to go out on the roads of Lahore. He wanted to visualize the changes with his own eyes. He was a person who could not afford to wait.
He could not wait for things to take shape. He wanted everything to happen quickly. When he was going to have his first child, he was unable to sit quietly and wanted to see the child even before it was born.
He got busy in talking about the changes which the new Act would bring about when he saw a gora soldier standing beside the lamp post. Ustad Mangue thought him the same gora who abused him last year. He wanted to take revenge.
Both entangled together and Mango raised his hand suddenly and gave him a terrible thrash. The gora could not believe that it was really happening. Two policemen rescued the gora.
Ustad Mangu was arrested but he was crying New Constitution, New Constitution. What rubbish are you talking about? What new constitution? It is the same old constitution, you fool, he was told. Then they locked him up

What were Mangu’s expectations at the enforcement of the new constitution?

The New Constitution has been written about India Act 1935. It was the period when Indians were the slaves of the British. It was expected that the Government of India under the Act of 1935 would liberate the Muslims and Hindus of India.
The people were expecting a new era of justice, equality, and freedom. The people of the sub-continent hate the British and wanted to live freely. The protagonist of the story was a humble tongawala. He lives in Lahore.
Ustad Mangu, a poor tongawala was a completely illiterate person. He hated the British because of their cruel and inhuman attitude toward the helpless people of Sub- Continent. One day he picked up two fares from the district courts.

It is said that from 1 April, there’s going to be this new constitution. Do you think change everything

He gathered from their conversation that there was going to be promulgated a new act of India from April ist 1935. He reflected that the new act would liberate them from the yoke of slavery and subjugation of the English.
It would bring prosperity, justice, and equality to the people of India. Mangu became very happy and carried that good news to the other tongawalas. He told the Nathoo another tongawala.

I have great news for you. It’s so good that it might make your hair grow back

Soon he heard from lawyers and students talking about the new constitution. His faith in the new act became more and more strong. He hoped that the rulers would be transferred to the natives of India and he would be free to settle his old sores with the English.

I think things are going to open up with the new Act. Just imagine, we are going to have elected assemblies and if Mr… gets elected, I’m bound to get a government job.

He wanted to see something colorful and dramatic. Mangu was totally convinced that the changes being brought on the April Ist were the direct result of the influence of the Russian king.
He firmly believed that everything would change with the enforcement of the new act. But the British observed the new constitution as the Fool’s Day. Ustad Mangu has been portrayed as a representative of common Indians.

Why did Ustad Mangu hate the British?
Or
Why did Ustad Mangu call the English white mice?
Answer:
The story, The New Constitution by Saadat Hasan Manto criticizes British imperialism and colonialism. The English rulers of India were against the will of the natives. They treated the natives worse than animals.
Ustad Mangu the tongawala lived in Lahore. He was considered a wise man among his friends because of his personality and common observation. He had his own opinion about everything and spoke on every topic freely.
He loved his country deeply and was grieved because of foreign rulers. He hated the white people and wished to get rid of them as soon as possible. He hated the British who were ruling over India against the will of the native people.

Look at them, came to the house to fetch a candle and before you knew, they had taken it over

They had been ruthless, cruel, and callous to them. The people could not rise in revolt against them but they had strong feelings of hatred against the foreign rulers. Ustad Mangu developed this hatred because of the cruel and inhuman behavior of Gora soldier.
It was the Gora soldier of the cantonment, who was the reason for his great hatred and anger. He simply nauseated when he came across a white and ruddy Gora soldier. He said: Their red faces remind me of decaying carcasses.
After a bitter and violent quarrel with a drunken Gora, he used to remain depressed and dejected for many days. He returned to his adda and cursed them by saying, human monkeys.
Mangu also hated the deceitful nature of the rulers who never wanted to give freedom to the people of India. They might promise for better works in the favor of common people but they did not fulfill the promise. So because of these reasons, Ustad Mangu hated the British.

As God is my witness, I’m sick of humoring these Lat sahibs. Every time I look at their blighted faces, my blood begins to boil.

The New Constitution is the story of the injustice of colonial rulers in the sub-continent. Discuss

British ruled India for almost one hundred years against the will of the native people. Like all colonial powers, the rule of the British in Sub-Continent India was an ugly and undesirable specimen of injustice, cruelty, and tyranny.
People of Sub- Continent India wanted freedom and liberty from the clutches of the British. They did not like the chain of slavery. They wanted to lead an honorable life of a free nation.
On the other hand, the British, for the completion of their own shaped agenda, wished to prolong their rule and completion to rob the resources of the sub-continent under the guise of government.
The New Constitution is the story of lofty hopes and great expectations of the people of sub-continent India. Ustad Mangu, the major character of the story was the sole and comprehensive representation of the common people.
He was a sincere democrat and son of land. His only desire was to see his motherland free. No doubt, he was a layman with no authority or challenging powers, yet it was quite obvious that he not hated the foreign rulers but also had a strong desire to live independently and liberal.
As liberty and freedom requires constant vigilance and alertness, the people of sub-continent India left no stone unturned for freedom. During the struggle against usurps, they faced great hardship, trials, and tribulation.
Consequently, after facing all the problems, the efforts of native people bore fruit and they became independent. In this way, they faced much cruelty and injustice, but they were able to get the fruit of independence.
Nov 19, 202019 Comments on The New Constitution Short Story Literary Analysis | Saadat Hassan MantoUncategorized