A Visit To A Historical place | English Essay for 2nd Year 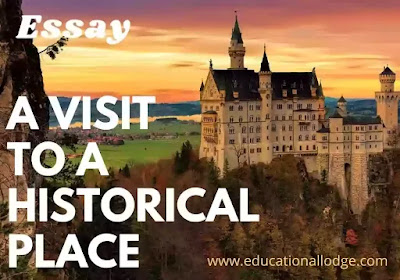 A Visit To A Historical Place, An Essay

Historical hallmarks, distinct deeds of genius, accomplished achievements of people; admirable accomplishments of individuals, and cultivation of art collectively constitute the culture of a nation. Culture is the radiance that casts its luster on every sphere of life. It is the fiery fervor to enhance enlightenment.

Pakistani culture, though replete with all these attractive attributes are outstandingly exceptional for its marvelous historical heritage The most startling and spectacular superiority of our culture is pleasurable of the Muslim Architecture. And the historical places are the esteemed and exalted emblems of Muslim Culture in Pakistan.
A fortnight ago, my mates and I planned an entertaining excursion. We decided to explore the sheltered mystery of the historical places of Lahore. We finalized our program in a trice. First of all, we decided to visit the legendary tomb of Jahangir. We hired a taxi and reached the elegant tomb without any hitch.
The four magnificent minarets of the tomb presented a stunning sight. They looked like eagle-eyed guards to shield the terrific tomb. Lofty walls and an elegantly decorated big gate guarded the mausoleum of the great emperor. The tomb occupies the heart of a fragrant park.
The park was studded with blooming buds and fragrant flowers. Evenly spaced, thickly growing tall trees with big and lush green shoots (04) enriched the beauty of the place. The flowers” fluttering and dancing in the breeze” presented a spectacular sight. The fruit trees were blossoming.
The swaying twigs of trees, the leaves, the twittering  birds and the whistling wind created an impact of a sanctified place. Impressed by the “soft incense hanging upon the boughs” and “many incense-bearing trees.” l began to sing the beautiful verses of Keats:

Ah, happy, happy boughs that cannot shed
Your leaves, nor ever bid the spring adieu

In front of the great tomb, a lovely fountain was spreading its light shower. The drizzling of hoary drops of the fountain produced ultimate excellence. Summing up in the words of S.T. Coleridge, it was

A savage place, holy and enchanted.

Soon afterward, we entered the majestic mausoleum of Mughal Art containing the grave of the emperor. What a life of luxury and abundance he had enjoyed, but now he was lying alone and deserted in the sheer calm of infinity.

Oh threats of Hell and Hopes of paradise!
One thing at least is certain-This Life flies.

The walls of the room were adorned with floral designs. There were curious colorful patterns signifying death. We offered “Fateha” and prayed to Allah to be Merciful and Beneficent to the departed soul. As a whole, the building is a marvelous specimen of Muslim architecture, and matchless in its beauty and structure.
We came up to the top of the tomb and had a beautiful spectacle of Lahore from there. It was a startling scene. The balmy breeze, fluffy clouds floating in the firmament, the sun hiding behind a flimsy veil of clouds, and the prevailing aroma of the blooming flowers made the panorama so charismatic that it had a lasting impact on our memory.
Then we descended the stairs and sat under a huge shady tree in the park. We spent the rest of our time eating meals, drinking tea, and making some of the sketches of the floral designs we had just observed in the vast chamber of the tomb.
When the brightness of the day faded into the descending dusk, we hesitatingly headed home. Our minds were full of solemn thoughts. we were pondering over the mystery of death. We all agreed with Shakespeare;

In Nature’s infinite book of secrecy, a little I can read.

Jul 14, 202013 Comments on A Visit To A Historical place | English Essay for 2nd YearUncategorized