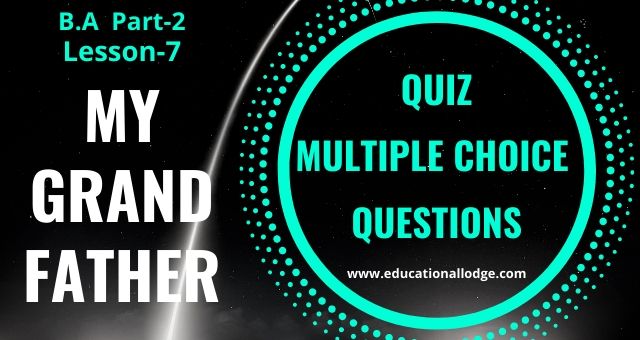 1. Who is the writer of the essay My Grandfather”?

(a) autobiography
(c) Symbolic story
(b) Monologue
(d) None of these

(a) Service
(b) memories
(c) War activities
(d) future
6. Where does the Yests pass his vacation?

13. What was the name of the window, that Yeats used to see?

14. The ‘name of the city, where the Yeats’ grandfather lived.

15. We should not take the light of the troubles of the children. Who did it say the sentence?

Short Questions and Their Answers

Q I: Who is William Butler Yeats?

Ans:William Butler Yeats was an Irish poet, dramatist, and statesman.

Q 2: Write the names of the writer’s plays.

Ans :  “The Countess Cathleen”, “The land.of heart’s desire”, “The Wild
Swans at Coole.”

Q 3: what does the writer describe in the essay ” My Grandfather?

Ans: In this essay, the writer recollects his childhood memories of his
maternal grandfather.

Q 4: How does the writer Yeats feel in his childhood?
Ans: The writer suffered from lawlessness and often felt misery in his
childhood. He had a red pony and garden to walk about.
Q 5: What kind of the Yeats’ grandfather was?
Ans: His grandfather was the only child of his parents. That is why he was
silent, solitary, and had few friends. So his grandfather was the silent
natured person.
Q 6: What kind of adventure the Yeats’ grandfather had done in his
youth?
Ans: The grandfather Of the Yeats had traveled widely and had gone to
many parts of the world. He also had won freedom of some Spanish city.
Q 7: How does the grandfather look physically?
Ans: Yeats’ grandfather was physically very strong and healthy. He
never asked anybody which he himself did not do.
Q 8: What kind Of nature had the grandfather of Yeats?
Ans: He had a violent temper person. Instead of .going to the law, he would
knock burglars down. He was even fond of reading and •had a great
knowledge of politics.
Q 9: Had the grandfather of the writer ships in his own ownership?
Ans: Yes, he had owned many sailing ships but he was never
impolite to any of his employees.
Q 10: Describe Yeats’ grandmother.
Ans: The writer’s grandmother was a very kind, most gentle, patient, and
generous lady. She was fond -of handwork. She had a hobby like
gardening.
Q II: Why did the Yeats’ grandmother punished him?
Ans: The writer’s grandmother only once punished him. She punished
him on account of doing playing activities with the servant of the house.
Q 12: How did the writer knows his relatives?
Ans: The writer remembered many uncles and aunts who came and went
there. He was always afraid of them.
Q 13: What did the Yeats realize in his youth?
Ans: In his youth the writer became a happier man and he realized that his
miseries were not real but self-imported.
Jul 13, 202031 Comments on Multiple Choice Questions | Quiz on My Grand Father Lesson-7Uncategorized