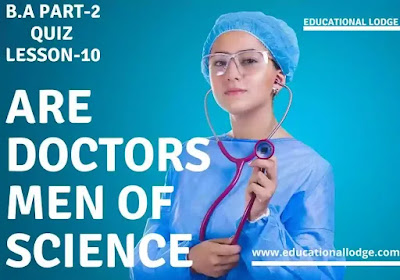 Are Doctors Men of Science Lesson#10 By George Bernard Shaw

Select the right answer from the following options

(a) Helmholtz
(b) Shakespeare
(c) Darwin
(d) None of these
7. According to Shaw an educated man who continuously reads scientific_______know more about science than a Careless doctor.

13. How many types of doctors are described in the essay?

14. The humblest professionals are?

(a) cure of disease
(b) victim of deception
(c) healthful recipient

16. Most of the quacks are unable to read.

(a) a test reports
(b) scientific books
(c)journals
(d) prescriptions

17. Who can earn money than surgeons?

(a) affliction
(b) malady
(c) ailment

Q I: Who was George Bernard Shaw?

Ans: Bernard Shaw was a famous novelist, playwright, music critic, and a reformer.

Q2: When did the Shaw born?

Q 4: Are the doctors men of science? What- is the view of the George Bernard Shaw?

Ans: According to George Bernard Shaw today• most of the doäors no more men of science. The majority of doctors are as scientific, in their work on their tailors.

Q 5: What does Shaw have a view about doctors that they have no interest in their profession?

Ans: He says that doctoring has become an art, not it is a science. Doctors have no knowledge of science and even they have lost interest in their profession.

Q 6: How does a common also -know more about science than qualified doctors?

Ans: They are earning a lot of money nowadays, as much money as any registered medical practitioner may earn that.

Q 10: Which other kinds of quacks and unregistered practitioners George Bernard Shaw tell us?

Ans: He tells us that there are many kinds of quacks and unregistered practitioners, like Bone-setters, hygienists, herbalists, and hakims.

Ans: In villages, witches prescribe spells and sell charms, so these are also called charmers.

Q 12: How do all these medical men do their work?

Ans: In fact, these qualified doctors and all other work on trial and error diagnose the diseases in the same method that is a risk.