Schools Reopening Will Be From 15th August 2020 in Punjab | Dr. Murad Raas

> Uncategorized > Schools Reopening Will Be From 15th August 2020 in Punjab | Dr. Murad Raas 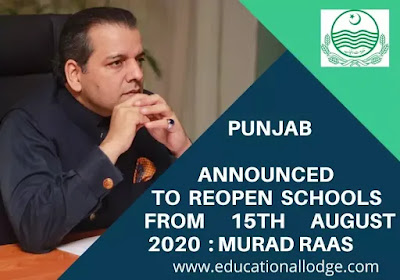 Schools Reopening In Punjab May From 15th August 2020

Punjab Education Minister Dr. Murad Rass has given hints that after a long time lockdown due to coronavirus, schools reopening will be started again from August 15. He stated further that schools may be resumed for working all over the Punjab, in different parts and in the first phase, essential classes will be allowed.
According to details, Punjab minister of education, Murad Rass said that if the current situation improves, the schools would start working again from August 15. The Provincial Education Minister also stated that in the first part of reopening of schools, 20 students would be allowed to sit in one class.
He added that schools could not be allowed to reopen from July 15, 2020. He said that schools will be reopened only ensuring the physical distancing among the students in the class rooms, However, the inter-provincial ministerial conference, which is scheduled to be held on July 07, will give the final decision
The National Command and Operations Center (NCOC) had given recommendations that educational institutions be kept closed till August, keeping in view of the possibility of a corona pandemic outbreak by July 15.
An inter-provincial ministerial conference that was to be held on July 2 to decide on the reopening of educational institutions. However, the conference was delayed due to the demise of Federal Minister Shafqat Mahmood’s mother.
The Federal Ministry of Education Shafqat Mahmood has demanded suggestions from the four provinces and the Higher Education Commission. Earlier, a meeting chaired by Federal Minister Shafqat Mahmood had suggested that special SOPs would be set up for reopening educational institutions.
A question was asked from the Punjab minister education about the LGS harassment case, on answering the question, he said that the parents of affected students had showed their willingness for a meeting.
It is important to mention that before his on the same case he said that department would not initiate any action without written complaints from the parents on this harassment scandal. The provincial minister Dr.Murad Rass has added that on Monday, he will conduct a meeting with the parents and effected students of Lahore Grammar School (LGS) Lahore.
It is also heard that higher education possibly may call college faculty on duties in colleges from 16 July 2020, but students would wait for the federal government next announcement.An anonymous Punjab HED official said everything is the part of the discussion at this moment and no final decision is announced yet.
Jul 5, 20205 Comments on Schools Reopening Will Be From 15th August 2020 in Punjab | Dr. Murad RaasUncategorized

5 thoughts on “Schools Reopening Will Be From 15th August 2020 in Punjab | Dr. Murad Raas”