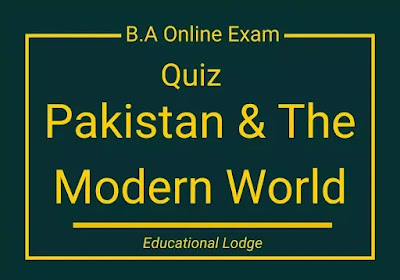 A Selection of Modern English Essays


MCQs :
Select the right answer from the following options

1- The subject is chosen by Liaqat Ali Khan

3- More than ______ the great explorers from Europe, voyaging out to discover the continent

Answer the following questions given below

Q.1  Who is the narrator of the modern essay Pakistan and the modern world?
Ans:  Liaqat Ali Khan who was the first Prime Minister of Pakistanis the narrator of the essay.
Q.2 When did LIaqat Ali Khan visit America?
Ans: He visited America in 1950.
Q.3 Where did Liaqat Ali Khan deliver his speech?
Ans: He delivered his speech at the University of Kansas.
Q.4 What was the subject chosen by Liaqat Ali khan for his speech at Kansas university?
Ans: He told the Americans that he had chosen the subject of Pakistan and the modern world.
Q.5 What did he tell the American about the similarity between Pakistan and America during the freedom?
Ans:  He told them that America and Pakistani Muslims struggled alike. Their problems were the same and America can help Pakistan to overcome the problems.
Q.6  How many Muslims and Hindus lived in the sub-continent before freedom?
Ans: There lived three hundred million Hindus and one hundred million Muslims in the subcontinent.
Q.7 Was it possible to merge the Muslims and Hindus with each other as a nation?
Ans: No, it was not possible because of the great differences of religious, social, and economic between them.
Q.8 What point did Liaqat Ali Khan rightly raise before Americans?
Ans: He pointed out rightly the fact that the creation of Pakistan by itself had brought peace and happiness for Asia and Western countries.
Q.9 What kind of act did the Hindus and Sikhs with Muslims during the partition?
Ans: During the partition, the armed groups of Hindus and Sikhs were in the way of Muslims.hindus    and Sikhs slaughtered numberless Muslim men, women, and children, The Muslims were weaponless.
Q.10 What kind of difficulties did Muslims face after the completion of migration?
Ans: After the completion of migration, the Muslims suffered from many difficulties.the nation had no capital, no flag, and scientists and engineering Pakistan.
Q.11 What did Liaqat Ali Khan tell the true meaning of freedom?
Ans: He said that freedom did not mean the change of rulers or freedom from foreign domination only. True freedom meant that people should be free to practice their believes and values freely. It also meant freedom from wants, freedom from diseased, and freedom from ignorance.
Q.12 What were the expectations of Liaqat Ali Khan from America?
Ans: He expected to get help for Pakistan in various fields of life, like education, fun, experience, technology, science, industry, and agriculture.
Jul 3, 202032 Comments on Online Exams Preparation | B.A English Punjab UniversityUncategorized